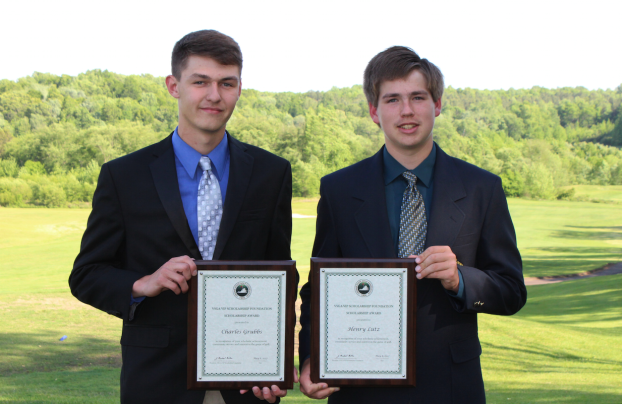 Two of the area’s finest high school golfers were among 41 student-athletes selected from more than 100 applicants to receive Virginia State Golf Association (VSGA) scholarships in recognition of their character, skills in the classroom and of the impact that golf has had on their lives.

Recently-graduated student-athletes Charles “Chase” Grubbs, of Cumberland High School, and Henry Lutz, of Prince Edward County High School, each received a $2,500 scholarship through the VSGA-VIP Scholarship Foundation during a ceremony in Richmond in May.

“It was a really great honor for me, especially once we got to the award ceremony,” Lutz said. “You got to see how good all of the other recipients were, because they were all near the top of their class with really high GPAs, so it was really nice to see that all the work I’ve put into it had put me with this group of really elite academic achieving golfers.”

Grubbs said, “I was super-proud of myself because obviously my essay was good. I know they didn’t choose many.”

According to a VSGA press release, scholarships were handed out to high school seniors based upon their academic achievement — ACT/SAT scores, GPA and class rank — their outside activities including work and community service and a 500-word essay describing golf’s influence on their life.

It was fitting that Grubbs and Lutz received their scholarships together after having competed together and against each other since the age of 9 or 10 when they took part in Piedmont Junior Golf tournaments.

Lutz, who went on to win the state title after also claiming the Region 2A East title, will be attending Rensselaer Polytechnic Institute (RPI) in Troy, New York and expects to play NCAA Division III golf for RPI’s team.

Lutz, who was also considering attending Princeton University,  said the RPI coach basically offered him a spot on the team if he was accepted to the school.

Grubbs is set to attend Virginia Tech and is aiming to play NCAA Division I golf for the Hokies.

“I’m definitely going to try to get onto the team,” Grubbs said. “I don’t know if that will happen, but they have a tryout in the spring, so in the fall, I plan on doing the club golf, and then when spring comes around, I’m going to try to try out.”

A team with remarkable heart

The Prince Edward-Farmville Youth Association (PEFYA) Instructional All-Star team left a lasting impact on its coaches even if it did... read more