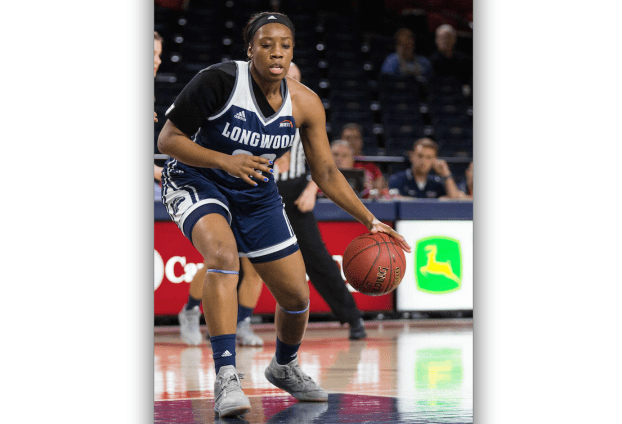 She becomes the first Longwood women’s basketball graduate to sign a professional contract.

“I’m beyond excited to play professionally overseas,” Gilliam said. “This has been something I’ve always wanted to do after college. I truly thank God for blessing me with this opportunity.”

She will make her professional debut when the season opens Sept. 25.

“Eboni has worked extremely hard for this opportunity,” Lancers Head Coach Bill Reinson said. “When we recruited her, she said that playing professionally overseas was something she wanted to accomplish. Eboni never lost sight of that goal.”

Gilliam averaged 9.1 points, 6.2 rebounds and 24.0 minutes throughout her two seasons for the blue and white after transferring in from Cape Fear Community College following her sophomore season.

“In addition to playing basketball, Eboni will enjoy Spain,” Reinson said. “It is a wonderful country with a terrific culture and warm, friendly people. It’s fantastic when young people achieve goals that they set for themselves. I couldn’t be happier for Eboni. She will do very well.”

She also recorded seven double-doubles and finished in double figures 21 times over her Longwood career.

“I’m so thankful for my coaches and teammates at Longwood for molding me into a better player,” Gilliam said. “I couldn’t have gotten here without their love and support the last two years.”

The Buckingham County Youth League (BCYL) Minor League All-Stars were not able to carry their winning ways from the district... read more