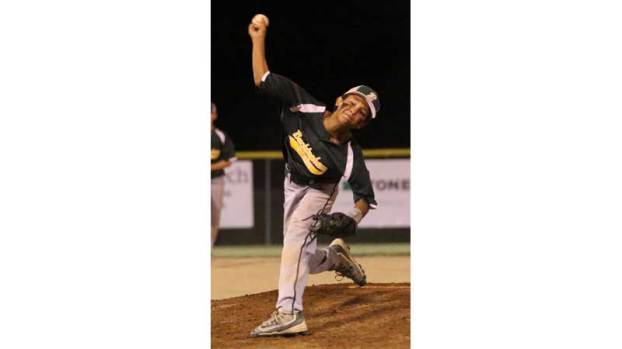 BCYL Majors All-Star George Hurt pitches in the top of the sixth inning, helping his team secure a 6-5 comeback state tournament victory over the Lunenburg All-Stars in Victoria on Saturday night. (Photo by Titus Mohler)

“We made a few mistakes when the game started, and we just made up for our mistakes, and when the game was over, our boys came out with another victory,” BCYL Majors All-Star Manager Ben Gormus said.

After falling behind 5-1 in the first inning, Buckingham began its resurgence in the third when Cam Newton hit a two-run home run, changing the momentum of the ballgame.

Justin Gunter contributed strong pitching across five innings, throwing five strikeouts. George Hurt closed out the game on the mound in the sixth and final inning, throwing two strikeouts and coming up with a key tag at home plate to prevent Lunenburg from scoring the tying run.

Hurt and Eli Bryant each went 2-for-3 at the plate on offense.

“They’ve got winning in their heart, and that’s what counts, really what counts,” Gormus said of his players.

As for his thoughts on his team’s performance through two state-level games, “I feel good,” he said. “Our boys don’t quit.”

Thrilling from start to finish