A 26-year-old Cumberland County woman was found guilty on nine of the 28 charges she faced — the majority of which were in connection to lottery ticket larceny, embezzlement, petit larceny and drug sales that occurred at The Market Express No. 4 gas station at 1611 E. Anderson Highway. 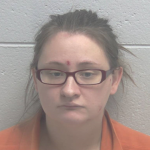 Atkinson is set to appear in Cumberland Circuit Court Aug. 1 on a felony charge of first offender of alcohol violation and to set restitution, according to court officials.

Atkinson will serve an active term of seven months and 10 days in jail.

In addition, Atkinson received 46 years suspended in jail for the remainder of the charges.

Cumberland Sheriff’s Deputy Ryan Bates began investigating the incidents following a call from the manager of the store March 16 at 8:30 p.m. to investigate video surveillance footage.
In a previous interview, Bates said the footage showed an employee of the store stealing lottery scratch tickets and putting them in a bag. The incidents took place while Atkinson was working.

According to a previous interview with Sheriff’s Deputy Matt Seal, during Bates’ investigation, police observed Atkinson on camera stealing cigarettes and beer.

This was in addition, Seal said, to occurrences where police saw “suspicious transactions” take place between her and several others who were later identified, interviewed and questioned.

“Basically all of them admitted to going up there and selling marijuana (and) methamphetamine; also trading marijuana for prescription pills — Adderall,” Seal said.

Seal said he was brought into the investigation following the discovery of narcotics being involved.

The Prince Edward County Board of Supervisors unanimously approved a motion to send a letter to the Virginia Outdoors Foundation... read more