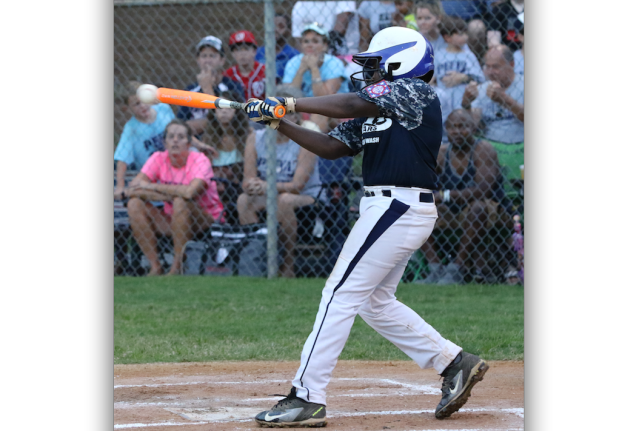 Thrilling from start to finish

PEFYA Manager Jerry Morgan had a good feeling about the game when his team quickly notched three outs on defense in the first inning.

“Our defense played phenomenally,” he said Wednesday. “I think that played a big part in our win yesterday.”

Filled with plenty of fight, Lunenburg claimed a 5-3 lead in the third inning and a 9-7 advantage in the fourth that it grew to 11-7 in the fifth.

In the bottom of the fifth, PEFYA roared back with an eight-run rally, half of which came courtesy of a Clevante Watkins grand slam.

With Prince Edward-Farmville up 15-11 in the top of the sixth, Lunenburg engineered a rally, helped by a grand slam of its own, taking a 16-15 lead.

Lunenburg had the bases loaded with its cleanup batter poised to drive the runners in when Austin Morgan, PEFYA’s youngest player, took the mound and threw one pitch which was hit to Watkins whose throw beat the runner to first for the third out.

In the bottom of the sixth, Lunenburg walked Harold Landis, Watkins recorded a base hit, and Kam Ligon hit a ball that bounced off the top of the outfield fence and back into play. It was ruled a ground-rule double, and it allowed the tying and winning runs to reach home plate for a 17-16 championship victory.

The PEFYA Minors (5-0) clinched their berth in the State Dixie Youth Baseball AAA Minor League All-Star Tournament on Monday when they defeated the Crewe-Burkeville All-Stars 23-7.

Watkins shined in that game as well, hitting two singles, two doubles and a three-run home run. Landis had two doubles, and Ligon, M.J. Holman and Josh Simon each had one.

Landis, Noah Boehmer and Watkins starred on the mound.

Jerry Morgan said his team is undefeated “because they never gave up. They just kept their heads in the ballgame and just kept hitting the ball like they know they could.”

Held in Appomattox, the state tournament begins July 21, when PEFYA will face the Buckingham All-Stars at 4 p.m.