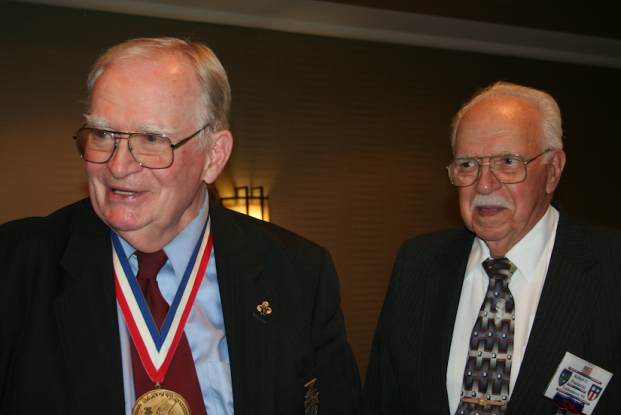 Ret. Lt. Gen. and Merrill’s Marauder Sam V. Wilson, 93, left, who died Saturday, is pictured with Merrill’s Marauder spokesman, historian and former editor of the “Burman News,” Bob Passanisi, 92, at a Marauder reunion several years ago when Wilson was the guest speaker.

Wilson, 93, who completed his active military career in the fall of 1977, served as director of the DIA from May 1976-August 1977 and was known for his work in doctrine for low intensity conflict, where he coined the term counterinsurgency, or COIN. Wilson is credited for helping establish the Delta Force, the Army’s top counterterrorism unit.

Last May, Wilson was honored by H-SC and the U.S. Joint Special Operations Command for his contributions to the nation’s intelligence and counterterrorism efforts around the world.

Often referred to as “General Sam,” his counsel was frequently sought by national leaders, including Presidents Richard Nixon, Jimmy Carter, Gerald Ford and George H.W. Bush, according to his biography. “His expertise was instrumental in the stand-up of a dedicated counter-terrorism unit and the legitimizing of special operations forces under a unified joint command.”

A public memorial service will be held at College Church in Hampden Sydney on Friday, June 23 at 1 p.m., according to a press release from H-SC.

“Hampden-Sydney College mourns the loss of this exemplary patriot and son of Virginia,” said H-SC President Larry Stimpert in the release. “Our thoughts and prayers are with Susi and his family. … In the pantheon of Hampden-Sydney men, perhaps no one is as beloved as ‘General Sam.’”

According to his biography, Wilson was born Sept. 23, 1923 in Rice. His father worked as a farmer near the Sayler’s Creek Civil War battlefield, and his mother taught school. After graduating at age 16 from Rice High School, Wilson lied about his age to join the Virginia National Guard as a bugler.

“Successfully rising in the enlisted ranks to acting first sergeant, he was sent to Infantry Officer Candidate School (OCS) where he graduated at the head of his class and was assigned as an instructor at the Infantry School, teaching among other subjects guerrilla and counter-guerrilla tactics,” Wilson’s biography states.

Retired Lt. Col. Rucker Snead, who works as a lecturer in government and foreign affairs at H-SC, helped identify some of the highlights of Wilson’s remarkable and wide-ranging military career, noting that with all the positions Wilson held, “they all come back to a leading role in U.S. special operations and intelligence operations.”

“For perspective, he was the top intelligence officer in the United States Military while he was director of DIA,” Snead said.

Noting Wilson’s development of the doctrine for counterinsurgency during Vietnam, Snead also highlighted his becoming commander of the 6th Special Forces Group (Airborne).

“Promoted to Brigadier General in the summer of 1970, he became the Assistant Division Commander (Operations), 82nd Airborne Division,” Wilson’s biography notes. “A year later, as the U.S. Defense Attaché to the USSR, the first general officer to hold that portfolio, he used his expertise in the Russian language, history and military strategy to visibly improve U.S. military relations with the Soviet military.”

Snead said Wilson’s role as defense attaché in Moscow during the Cold War was significant. He also noted that Wilson served as a HUMINT (human intelligence) officer with the CIA during the Cold War, running operations against the old Soviet Union.

“He was a spy,” Snead said. “That’s what it is. When you talk about James Bond, General Sam was doing James Bond-type of things back in the ‘50s in Eastern Europe as he was running intelligence operations.”

“A good part of that unit was killed or wounded or was evacuated because of (illnesses) — malaria, yellow fever, typhus — and I think he had just about all those diseases, and he survived,” Snead said.

After retiring from the military, Wilson came home to Rice. Snead noted that the uniform came off, but Wilson’s role of being a servant-leader endured.

“He truly believed in being a servant-leader, serving his local community, Prince Edward County, Southside Virginia, Hampden-Sydney College,” Snead said. “Yes, he was in leadership positions, but he was there to serve others, and that’s really much who he was and how he’d like to be remembered.”

Snead noted that as Wilson got involved in the community, he never held an elected position, “but he had the moral voice. So he was one of the key leaders, ultimately, with the development of the (Robert Russa) Moton Museum and the efforts for racial reconciliation. He served on the board of the Moton Museum for a long time,” and he was its president from 2000 to 2002.

In 2012, the museum honored “General Sam” for “his efforts and achievements to establish moral and social respect and dignity for all citizens of Prince Edward County.”

“That was kind of just in recognition to his quiet community leadership leading to efforts of the racial reconciliation, because segregation and racism very much bothered him, troubled him greatly,” Snead said.

Dr. David Marion, an Elliott Professor Emeritus of Government & Foreign Affairs, has worked at H-SC for 40 of the school’s nearly 250-year history, giving him some perspective on the impact of Wilson’s term as president.

“I suspect that in terms of what he meant to the college during his years as president and even in service to the college before his presidency and afterwards, he probably would have to be ranked among the most important presidents that the college has had,” Marion said.

Wilson stabilized the institution at a time when many small liberal arts colleges like H-SC were failing, Marion said.

In a press release, H-SC officials said, “Under Gen. Wilson’s leadership, the enrollment at Hampden-Sydney resumed growth and the endowment nearly doubled. As president, he also oversaw a number of symposia attracting national-level attention and laid the foundation for the establishment of a center focusing on leadership and public service now known as the Wilson Center for Leadership in the Public Interest at Hampden-Sydney College.”

Snead said, “As president, (Sam) realized that though the college had been educating and developing leaders for 220 years, we didn’t have a formal process. And one of the many things he’d been involved with in the Army was helping the Army develop leadership doctrine during World War II.”

Snead, the current director of the Wilson Center, added that the notion of creating leaders was something very dear to Wilson’s heart.

Marion said that something that could be said more generally about Wilson is that “he was somebody who was committed personally to making things better.”