A 16-year-old Buckingham teen and an 18-year-old Blackstone man are charged in connection with a residential burglary in Arvonia, along with several larcenies of vehicles and firearm violations in the same area and conspiring to break into a business in Blackstone. 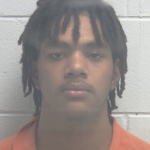 On June 14, shortly after 1 a.m., police located the juvenile operating a vehicle at Route 15 and Abe White Lane in Arvonia and attempted to stop the vehicle. “The juvenile struck a marked patrol vehicle when he failed to control his speed and was arrested without incident. Evidence recovered at the scene indicated the juvenile was planning to carry out a breaking and entering in the Blackstone area,” police said.

According to Kidd, investigators contacted Nottoway County Sheriff’s Office and Blackstone Police Department with the information, and by 6 a.m., with cooperation and assistance between the agencies, arrested Coleman.

“A firearm that was reported stolen in Buckingham County on June 12 was recovered from Coleman’s residence,” Kidd said. “Coleman was charged with receiving stolen property, conspiracy to commit breaking and entering and possession of marijuana. The Buckingham teen was charged with 10 juvenile petitions in connection with his participation in the incidents.”

“I would like to thank the deputies and officers from Nottoway and Blackstone for their assistance,” Kidd said. “This is an example of the success law enforcement agencies have when they cooperate and respond quickly to ongoing investigations. We were able to make the arrests, recover stolen property and apparently prevent a plan to commit further crimes from happening in the Central Virginia region.”