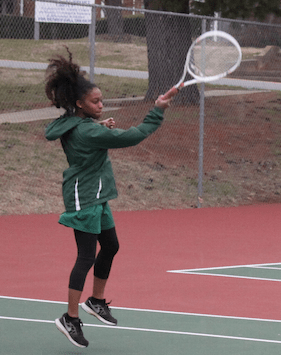 A Buckingham County High School varsity girls tennis team defined by its seniors finished with an 8-6 record, advancing as far as the Region 2A West tournament quarterfinals.

The Lady Knights fell 5-0 in the quarterfinals to host Central High School, of Wise, the team that went on to win the regional championship.

“It was overall a successful season,” Buckingham Head Coach Erin Lake said. “It was a really close, tight-knit group of girls. The majority of them were seniors who have been playing together for years, so it was a lot of fun. We did have a lot of success and a lot of wins and growth. Our players grew as tennis players, and our team grew as a cohesive unit throughout the season too.”

Their postseason run ended in the semifinals against Central, of Wise.

Lake said the high point of the season was seeing her players participate in the regional tourney, noting they played better tennis when they were challenged by more experienced competition.

“Sometimes in tennis the score doesn’t reflect how the match goes, like there could be really long rallies and the score could go to deuce a lot of the time, so there was a lot of that kind of play in the regional tournament against Central Wise, (which) went on to win the region tournament,” Lake said.

The coach said the low point of the season was losing in the Courthouse Conference 37 tournament final 5-4 against host Appomattox County High School.

Lake pointed to Ragland and Gough as season standouts, emphasizing the latter in light of her remarkable development.

“She really improved as a player,” the coach said. “Last year, last season, she was a very consistent player, however, she wouldn’t hit the ball hard, and so she wouldn’t dominate the points. And she wasn’t offensive in many of the points. So, that’s something that we worked on. Last year, it was a work in progress, and this year, she just came out swinging, and she would hit the ball nice and crisp and deep in the court and with lots of topspin.”

Buckingham players gone due to graduation include Ragland, Gough, No. 3 Emily Vaughan, No. 4 Taylor Costello and No. 6 Abbey Phelps, in addition to some exhibition players.

Lake said she will remember this team for the camaraderie that kept girls going through hard times.