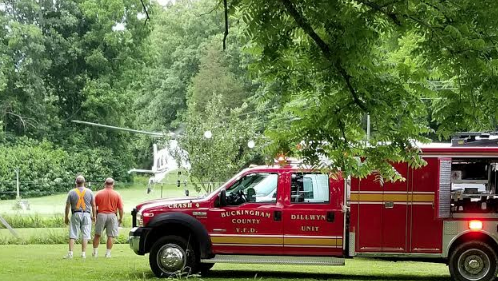 LYLA GOFF WOOD A med-flight helicopter takes off Tuesday, transporting the victim of a boat accident on the James River.

A 58-year-old Hopewell woman died in a boat accident reported Tuesday afternoon on the James River about two miles south of Howardsville between Buckingham and Nelson counties in the vicinity of Hathcock Lane.

According to Virginia Department of Game and Inland Fisheries Outreach Director Lee Walker, Deborah G. Stacil was with another female in a canoe on swift moving water at approximately 3:25 p.m. Tuesday.

Walker said the canoe got caught sideways and then pushed up on a log.

The canoe then began to fill with water and overturned, trapping Stacil under the canoe, Walker said.

Three people were able to cut the canoe free and retrieve Stacil, according to Walker.

Walker said CPR was administered to Stacil, who was transported by medflight helicopter to the University of Virginia Medical Center.

The accident came the evening those participating in the James River Batteau Festival were set to camp in Howardsville.