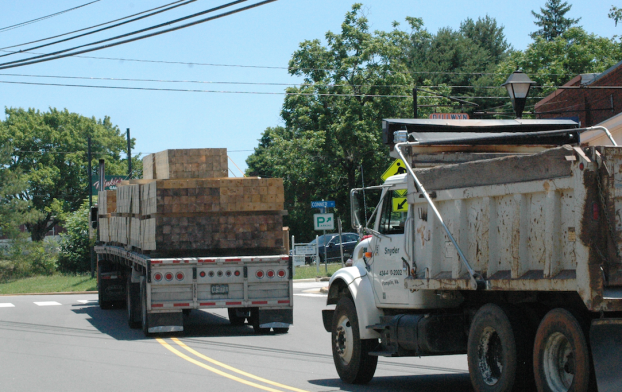 EMILY HOLLINGSWORTH | HERALD An area in the 1000 block of Main Street in downtown Dillwyn has created concerns as the curb, particularly with parked cars, poses difficulty for tractor-trailers and other large vehicles that travel along the roadway.

Q: What is the Town of Dillwyn doing to improve safety on Main Street about the curb near the downtown plaza where larger vehicles enter the opposite lane? 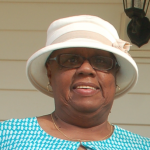 Persistent concerns about a roadway curb along Main Street in downtown Dillwyn has garnered sought-out input by town leaders and officials from Virginia State Police and the Virginia Department of Transportation (VDOT), according to Mayor Linda Venable Paige.

The curb is located in the 1000 block of Main Street near the town’s clock plaza and Dillwyn Pharmacy.

Paige said vehicles park along the right side of the roadway, though she said signs located there prohibit parking between the signs.

When vehicles are parked on the curb, Paige said, tractor-trailers and large vehicles, some that drive through the town to enter an industrial-size chipping mill north of Dillwyn on U.S. Route 15, have to veer away from the parked cars, which sometimes results in the the trucks traveling across the centerline of the roadway, creating a threat to vehicles traveling in the opposite directon.

“Contact has been made with the State Police and VDOT,” Paige said in an email.

A trooper with Virginia State Police visited the site at the town’s request first, Paige said. The trooper suggested VDOT become involved, adding the curb could be repainted to further warn motorists that no parking is allowed.

Scot Shippee, a resident engineer with VDOT, said he was not the representative who inspected the curb, but noted VDOT had received a request from the town to repaint the curb.

Shippee said the curb had been initially painted before as part of the town’s streetscape project, which started in 2010. He said it’s up to the town to repaint the curb.

“The painting of curb is above our minimum standards and the responsibility for refreshing that paint beyond the initial installation generally falls to the locality,” Shippee said.

Shippee noted that enforcing the “No Parking” policy along the curb would be an issue handled by police.

“Any parking in a no parking zone would be a law enforcement issue,” Shippee said.

Paige said there had not been any recent accidents reported at the area in question, but “near misses” which prompted the town to respond.

“This has been an ongoing concern for quite some time,” Paige said, adding the town is taking steps to address the issue.

Paige said she hopes that involvement or suggestions from State Police and VDOT would aid in better imposing penalties for parking violations along the curb.

She noted recent accidents across the county, including an accident that resulted in the death of two children March 30, have caused residents to become more sensitive to potential accidents in town.

“I don’t want something to have to happen to someone in order for action to be taken regarding the curb,” Paige said.

A marker was recently erected in front of the house that Martha E. Forrester lived in during her life at... read more