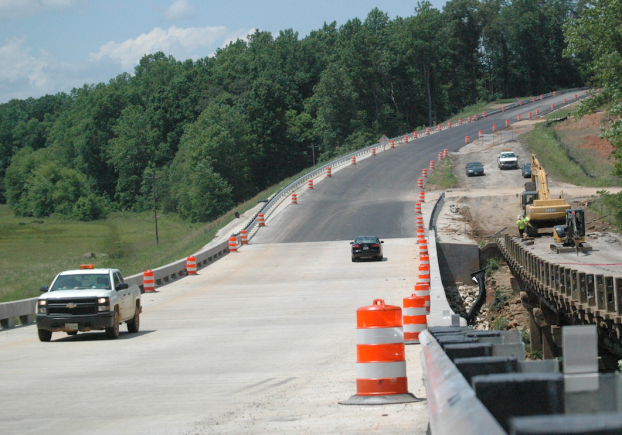 EMILY HOLLINGSWORTH | HERALD Motorists travel across the new Slate River Bridge, which was opened to motorists on May 17.

A new bridge has opened to motorists that spans the Slate River on Route 20 north of Dillwyn.

Paula Jones, a Virginia Department of Transportation (VDOT) spokeswoman, said the new bridge became available for travel on May 17.

“The new bridge meets current design standards and is built to accommodate wider loads,” Jones said. “In addition, the changes to the horizontal curve south of the structure improve the roadway and bridge access.”

Construction for the new bridge began in 2016 after the existing bridge was found structurally deficient following an evaluation by VDOT. The old bridge received a safety rating of 47.9 out of 100, according to the VDOT website.

The sufficiency rating, Jones said, was created by the Federal Highway Administration and measures structural adequacy, whether the bridge is functionally obsolete and the level of service the bridge provides to drivers.

The new bridge, costing $9.8 million and having been constructed by Alleghany Construction Co. Inc., of Roanoke, is located northwest of the existing bridge. The bridge is approximately 360-feet long and 47-feet wide, compared with the 25-foot width of the old bridge.

District Six Supervisor Joe N. Chambers Jr. commented on the bridge’s progress, saying while the old bridge “met our needs at the time,” the new bridge offers a safer alternative both for motorists and bicyclists.

“It will be … safer for the people who travel,” Chambers said. “It won’t be as dangerous coming across there.”

The old bridge, Jones said, will be torn down.