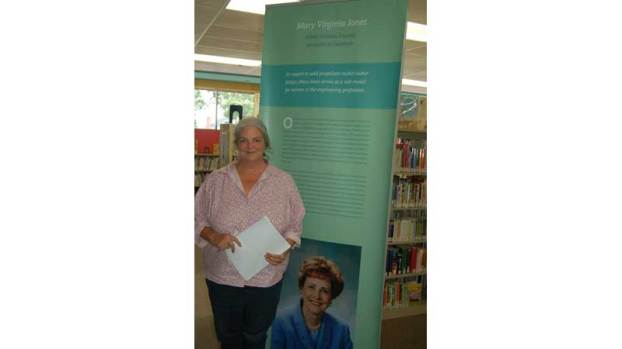 MORGAN WHITE | HERALD Assistant Librarian Grace Barlow stands beside part of the Virginia Women of History display, which was on through June 20 in Buckingham.

The Buckingham Branch Library offered the community a display of this year’s Virginia Women of History through June 20.

Ewing said the women were selected by the Library of Virginia.

“They do this each year and this year, since they had a Buckingham person, Louise Harrison McCraw, someone told me about it and I called the state library (and asked them to bring the displays), and they said ‘Sure,’” Ewing said.

Buckingham Library Branch Manager Amy White said the library, in support the community, wanted to showcase influential women from across the state who have made a difference in their respective fields.

“I like looking at the exhibit because it makes you realize different people in the area that have had an influence that you might not have even known,” White said. “So you get to learn a little about women in Virginia history.”

Ewing said showing the display, which included historical information about each woman, was exactly the sort of thing libraries should be doing.

“It’s kind of what libraries do — (informing) the public — and the state library wants this to go into local public libraries around the state,” Ewing said.

‘Trump has been in violation’