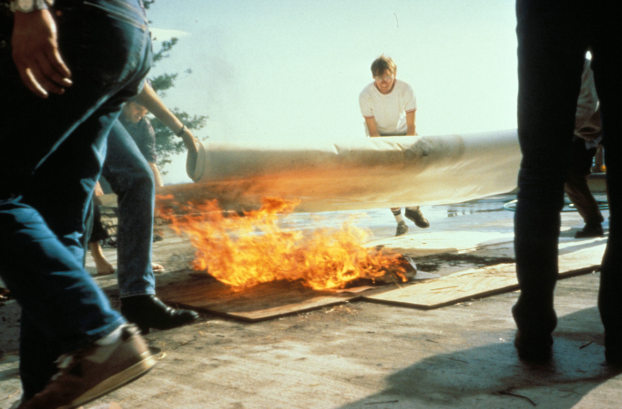 The Longwood Center for the Visual Arts has received a $25,000 grant from the National Endowment for the Arts (NEA) that will aid the center as it exhibits and publishes the story of a collaborative art series that unfolded over four decades.

LCVA Executive Director Rachel Talent Ivers said funds from the grant will go toward the packing and transportation of artwork, gallery preparation, exhibition design and the development of interpretive content for the exhibition, “Mountain Lake: Art in Locale.”

In addition to funding the exhibition, the grant will fund printing a related publication.

“Many of the works in the exhibition are very large, so transportation and shipping are quite a challenge,” Ivers said.

She said she was “extremely proud” but also humbled the LCVA was selected.

“It is always an honor to receive funding from the NEA because their programs are so competitive and applications are peer- reviewed,” Ivers said. “It means many people with expertise in the art museum field found your project worthy of funding.”

Ivers said she’s written or collaborated on several successful NEA grants prior to joining the LCVA, so she was familiar with the process and the challenges of persuading the reviewers to fund the proposal.

“I actually choked up a little when I received the initial notification because the endowment has very limited funds to distribute, and with its proposed elimination, this could possibly be among the last projects funded by the NEA,” Ivers said. “It made their decision to fund the project even more significant.”

The grant was funded through the NEA’s competitive program, Art Works, which provides $82 million in funding for art projects in every state across the country.

According to Ivers, applying for the grant is a multi-part process with two agency deadlines.

“I worked with Regina Maldve, Longwood’s director of sponsored programs, once the project was developed enough to support an application. I drafted a synopsis, which she submitted as part of the first project deadline,” Ivers said. “The bulk of the application is submitted as part of the second deadline. Regina also worked closely with me in developing and reconciling the project budget, (reviewed) the entire proposal prior to its final submission, and (facilitated) all of the required university approvals.”

She said the application is fairly extensive and requires very thorough responses.

According to an LCVA press release, the exhibition showcases the dynamic and experimental integration of the arts and sciences in a collaborative creative process known as the Mountain Lake Workshop and Symposium.

The Farmville Planning Commission will soon see three new faces in an effort by the town to increase the representation... read more