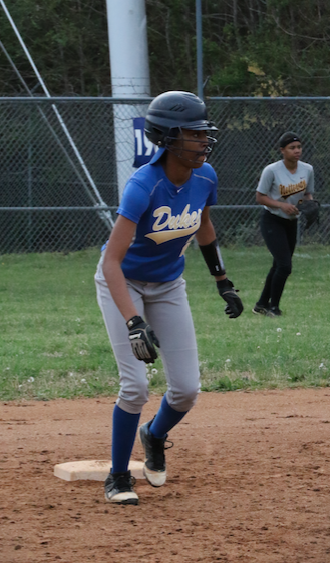 Lady Dukes: a team on the rise

Clear signs of improvement shaped the season of a Cumberland High School varsity softball team that came together amid difficult circumstances.

“I think we did great this season,” Lady Dukes Head Coach Kamren Gilliam said. “They had a better overall record than we had last season.”

“We finished out the season pretty strong, making it to the conference semifinals and losing 6-0 to (No. 1) Mathews (High School),” she said, noting that the Lady Dukes lost 22-0 to Mathews last year.

To reach the Conference 42 tournament semifinals, the No. 4 Lady Dukes blew out visiting No. 5 Middlesex High School 10-0.

Reflecting on the season, Gilliam said, “The high point was I think the girls bonding well with each other.”

This bond became especially important as the girls attempted to deal with a loss far greater than one they could ever experience on the diamond.

Gilliam said this had a huge impact on her players, some of whom were close friends with the girls.

As the Lady Dukes pressed on, Gilliam noted they valued each other even more than they had before.

“I’ve had a couple compliments come from some umpires, and a couple of the coaches talked about how well defensively the team was this year compared to past,” Gilliam said.

Cumberland struggled to hit with consistency during the season, but improvement was clearly on display in the playoff win against Middlesex when the Lady Dukes accumulated 11 hits, including three apiece from senior outfielder Bria Anderson and senior first baseman Mary Kate Perry.

Anderson was named to the All-Conference 42 first team, leading Cumberland with a .431 batting average. She also had 25 hits, including one home run, 21 runs scored, seven RBIs and 12 stolen bases for the season.

Also representing Cumberland on the all-conference first team was senior pitcher Kasie Fowler, who threw 49 strikeouts and had a 3.96 earned run average in 70.2 innings pitched.

Perry, who will be playing for Emory & Henry College, was a season standout for the Lady Dukes, carrying a .339 batting average and producing 20 hits, 23 RBIs and 16 runs scored.

Seal, who Gilliam pointed to as a key player in Cumberland’s future, had a .333 batting average, with 20 hits, including one home run, and 15 RBIs.

Lancers learn their roles in time to win

Longwood University’s 2017 softball team struggled in ways that its 2016 squad did not, but the 2017 Lancers adapted to... read more