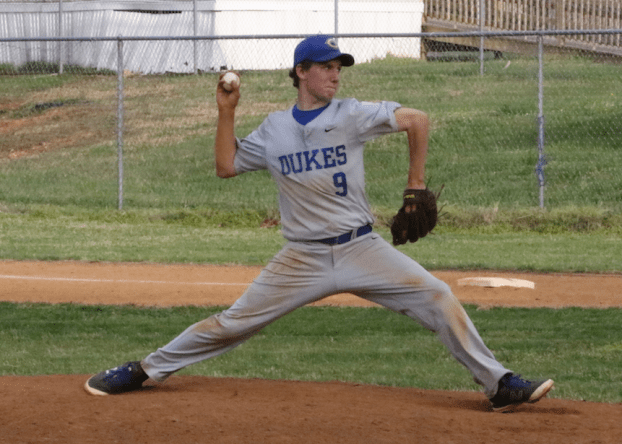 Cumberland High School’s varsity baseball team was showing its coach growth and readiness to make an impact in the playoffs before inclement weather unexpectedly led to the end of its season without any postseason play.

The Dukes (3-16) earned the No. 5 seed in the Conference 42 tournament and were set to play No. 4 Charles City High School in the quarterfinals.

“However, the rains did not allow us to play against Charles City and the top four seeds of the tournament advanced due to time constraints,” Cumberland Head Coach Paul Nelson said.

He noted that he felt his team came on strong toward the end of the year.

“We were getting a couple players back from injury,” he said, adding that calling up some younger players from the junior varsity (JV) squad “really changed the dynamic of the team and added a spark of energy to the group. If we were able to play in the playoffs, I think we would have had the opportunity to make a lot of noise.”

In the final 10 days of the regular season, the Dukes won 11-9 against Prince Edward County High School, and though they went on to lose games against Buckingham County, Nottoway and Central Lunenburg high schools, Nelson noted his team’s performances were strong.

The coach also highlighted senior pitcher Kaleb Boyles for finishing with the lowest earned run average and the most strikeouts on the team. Sophomore Braden Gilman allowed a team-low 10 walks.

The young contributors who made the jump from JV to varsity late in the year included freshmen Jordan Smith, Cal Smith and Jason Cooke and sophomore Owen Baldwin.

“Jason Cooke came in and struck out four players in two innings, closing the game vs. Prince Edward,” Nelson said. “These underclassmen showed their ability to play at a higher level and perform under less-than-ideal circumstances.”

“These individuals gave us from two years to five years of great baseball, and it’s a shame we couldn’t get them another game of playoff baseball,” Nelson said.

“These individuals look to go into the offseason with the intentions of working hard, and all have expressed interest in playing summer baseball,” Nelson said.

Acknowledging his coaching staff, he said, “Without the help of my assistant on varsity, Coach E.J. Allen, Head JV Coach Bryant Winbush and his assistant, Tyler Jenkins, I know we would not have had the success that we did have. These young coaches have been essential in teaching the young men not only about baseball but about overcoming obstacles in life as well.

He also expressed pride in his players “who came together as a family throughout the year even through some very tragic circumstances.”

Nelson added he is also looking forward to seeing JV players like Logan Loftis, Kahare Sutton and Jordan Newman making the step up to varsity and challenging for starting positions.