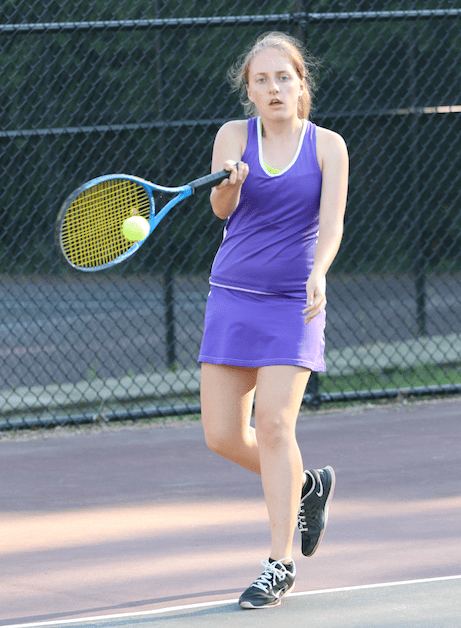 TITUS MOHLER | HERALD Prince Edward junior Grace Rust competes during the Conference 34 singles tournament semifinals. She was a standout this year for the Lady Eagles.

It was a successful year for the 2017 Prince Edward County High School varsity girls tennis team, which finished with an overall record of 10-6.

“They were very consistent,” Lady Eagles Head Coach James Scott said of his players. “They played very well as a team. They were very coachable, and they stepped up to the plate. It was a good season.”

Prince Edward held the No. 2 seed in the Quad Rivers Conference 34 tournament and fell narrowly in the semifinals to No. 3 Goochland High School.

“I think that we played hard,” Scott said, though he noted it was tough to lose in a couple of tiebreakers. “It could have went either way. I think they held their own.”

One of the tiebreakers came in a singles match featuring Lady Eagles junior Grace Rust, and the other came in a doubles match with senior Kendasia Hensley and Rust on a team.

“They played hard, came up a little short,” Scott said, as Morgan fell in the quarterfinals and Rust lost in the semifinals.

The coach indicated that Rust stood out this year. She was the Lady Eagles’ No. 2 singles player.

“She was very consistent, stayed focused and had a lot of determination, and she had a will to win,” Scott said.

He noted that her serve improved and her forehand became a strength during the season.

Rust will be back next year, though Prince Edward will be without Morgan, Hensley, Cameron Goodman and NiKeyra Lee due to graduation.

“We’re going to work hard this summer,” Scott said, pointing to the goals of getting better and filling the holes left by the seniors.

Learning and competitive opportunities were abundant at the 2017 Jayson Gee Basketball Camp with 35 boys and girls ages 5-16... read more