Clair Bugg Holland, 93, passed away peacefully in her home surrounded by her family on Thursday, June 15, 2017. Born on March 23, 1924 to the late James L. and Clair Woodruff Bugg, Clair grew up in Farmville, Virginia, attended Farmville High School and graduated from the State Teacher’ s College (now Longwood University) in 1944. 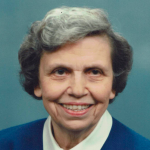 After graduation, Clair began her teaching career in Suffolk, where she met and married her “true love” the late James Elam Holland in 1949. The couple moved to Christiansburg, back to Suffolk, and to Richmond before settling in Charlottesville in 1959. After serving as Director of Religious Education at Christ Episcopal Church for seven years, Clair returned to the classroom and taught at Greenbrier Elementary School in Charlottesville for 19 years.

Clair was an active member of Christ Episcopal Church. She served as a Sunday School Teacher, a member of the altar guild, a member of St. Margaret’s Guild and as the volunteer carilloneur for almost 40 years.

Clair will be remembered as someone who preferred to work behind the scenes. She voluntarily tutored countless students in math, visited people confined to their homes, and played the carillon for weekly church services as well as other special services.

Funeral services for Clair were held at Christ Episcopal Church on Monday, June 19, 2017 with interment at Westview Cemetery in Farmville.

In lieu of flowers, contributions may be made to the Christ Episcopal Church Carillon Fund at Christ Church, 100 Jefferson Street, Charlottesville , Virginia or to the American Heart Fund.

Condolences may be sent to the family at www.hillandwood.com.