Winning big in the Heartland 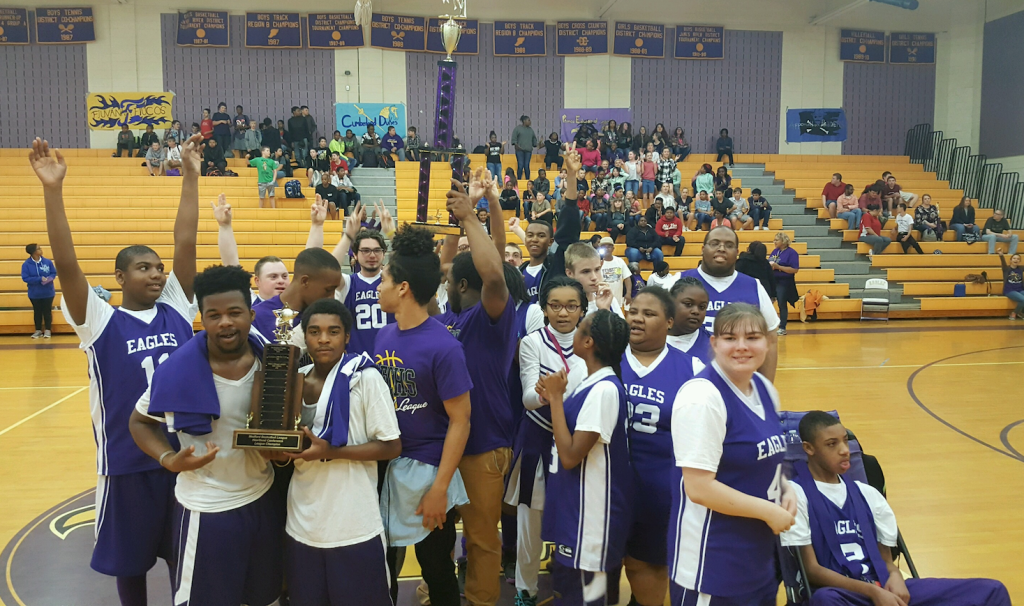 It was a triumphant season in the Heartland Conference of the Medford Basketball League (MBL) for the Prince Edward Eagles, but it is not hard to see that everyone involved in the league is coming away a winner in important ways.

Prince Edward County High School Special Education Teacher Sandee Draper said, “The primary purpose of the Medford Basketball League is to allow students with intellectual disabilities, autism, multiple disabilities and developmental delays opportunities to play in a competitive team sport like their non-disabled peers, to promote school spirit and to offer inclusive practices for our students with these disabilities.”

Significantly enhancing the experience of playing in the league is the degree to which it is interwoven into the fabric of the school rather than existing in a vacuum.

“Our team is known by every student of the high school,” Draper said of the Eagles. “After games, you will see students ‘high-fiving’ our players. It is an awesome experience to watch everyone — students, parents, teachers, administrators, central office staff, grandparents and others — come to our games and cheer on our players.”

The 16 players constituting Prince Edward’s MBL squad gave fans and their coaches plenty of reasons to cheer, going 8-0 during the regular season, then winning both games of the finals tournament. In the league championship game April 20, the host Eagles defeated Nelson 34-31.

As of the 2017 season, which ran from January through April, five schools fielded teams in the Heartland Conference of the MBL: Cumberland, Appomattox County, Fluvanna County, Nelson County and Prince Edward County.

She noted that “Prince Edward played in the Chesterfield Conference of the Medford Basketball League from 2010-2013, and then we decided to try and form a league in our region, and it worked!”

Draper said, “Buckingham participated the first two years of the league, but due to some health concerns of their players, they were unable to participate this year.”

Cumberland Coach Catherine Fleischman said her team featured six students this year, each of which used their strengths and talents to the best of their ability.

“One-to-three students would play during the games, and we would ask for students from the opposing team to help us out to have five on the court,” Fleischman said.

The coach noted that involvement in the league benefits the players on many levels.

“Like all team sports our players learn to follow directions and support each other in a group setting,” Fleischman said. “Students get to participate. They get to represent their school. They make friends, build confidence in social settings and improve physical stamina.”

Holman said the students on his team “really enjoy the interaction with the other players and traveling to different schools, especially Fluvanna County — they have a big school.”

Draper asked student-coaches Trent, Walton and Nash how the Heartland Conference has benefited the players involved, and she said they said that “it has encouraged the players to believe they can do what others do when playing basketball.”

“The student-coaches … said that they have enjoyed working with the students and have loved their smiles and will take with them lots of memories,” Draper said.

Holman highlighted a few players on his team for outstanding performances, including Cornal Green, for his three-point shooting, L.J. St. John, for his defense, and Corey Eppes, for inbounding the ball.

For Cumberland, Fleischman said, “Izaiya Booker improved in assists over the season. Keandra Chambers and Gabby Phelps cheered enthusiastically for both teams playing all season. Matthias Duncan improved in stamina over the season. Alexis Smith made all of the  guest-team players feel welcomed. Tykerria Kidd played her first quarter of a game. John Marion attended every game.”

Holman said what he enjoyed most about coaching in the league was seeing students from each participating school getting their moment to shine.