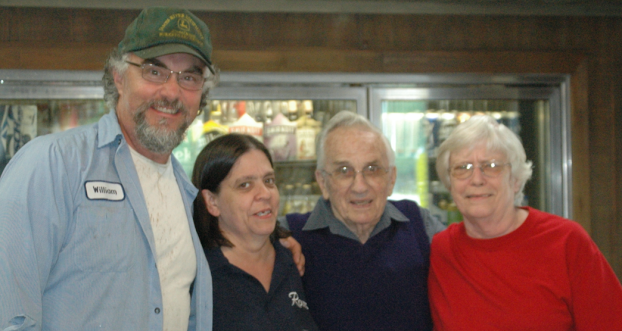 Tipton’s Midway Grocery, a one-stop shop for home-cooked food, groceries and gasoline on Route 45 in Cumberland, will close its doors to the public Sunday.

The announcement was confirmed by owner Julia Tipton — affectionately known as “Ma Tip” — who has operated the store since 1994.

The store brings in a host of regular customers, who frequently arrive for breakfast and lunch.

William Blanton lives less than a mile down the road. He said his father would bring him into the store when he was a little boy, when it was then owned by Ford Wilson.

Blanton said he then brought his own sons into Tipton’s, making similar memories that he had with his father.

Blanton said his favorite is the “Ma Tip Burger,” named after Tipton, which is a one-pound hamburger. Blanton’s two sons, Will and Alex, liked the double cheeseburger and the Chicken Filet.

“Ms. Tipton remembers when they weren’t any bigger than this,” Blanton said about Alex and Will, who this year will be 21 and 25 years old, respectively.

“I really enjoyed all of the home-cooked food over the years, and they have always been very kind to us,” Blanton said. “We are sad to see them go.”

Blanton said that a host of owners had taken rein of the store before Tipton operated it.

The store was operated by Wilson, followed by George Godsey, Virgil and Ruth Wright, then Tipton.

Blanton said Tipton and her daughter, Caroline, who had also worked in the store for a while, always made the community feel welcome.

“They were just down home people and really care about people in the community,” Blanton said. “When you came in, they made you feel as though you was at home — like you are family.”

Bill Bruce, also of Cumberland, said the environment of the store was like a piece of home, noting that it was not unusual for people who may not know each other well to sit together and share a good meal.

“A lot of farmers come in, grab something to eat,” Bruce said. “I’m not sure where they are going to go once Tipton’s closes down.”

Charles Falbo, of Cumberland, comes to breakfast and lunch with a group of friends, who often sit at the same table.

“Most of us come in every day,” Falbo said. “(I) always see these same guys in the same place.”

He said he has enjoyed the camaraderie for decades, noting it’s added to his quality of life.

Charlotte Baker has worked for Tipton’s for four years. She drives 45 minutes from Pamplin to Cumberland to prepare the breakfast foods at 5 a.m. before the store opens.

Baker said her favorite aspects of working in the store were forming friendships with the regulars and seeing their appreciation for the food and company.

“Just getting to know the people,” Baker said. She joked about the regulars: “They love (Ms. Tipton) being their second mom.”

When asked about her favorite memories, Tipton said, “It’s hard to pick a favorite.”

When asked what the experience has been like running the store as a whole, Tipton said it has been “a lot of hours. A lot of hours.”

Meeting explores land use at reservoir

A meeting discussing development of the land surrounding the Cobbs Creek Reservoir was held by the Cumberland County Planning Commission... read more