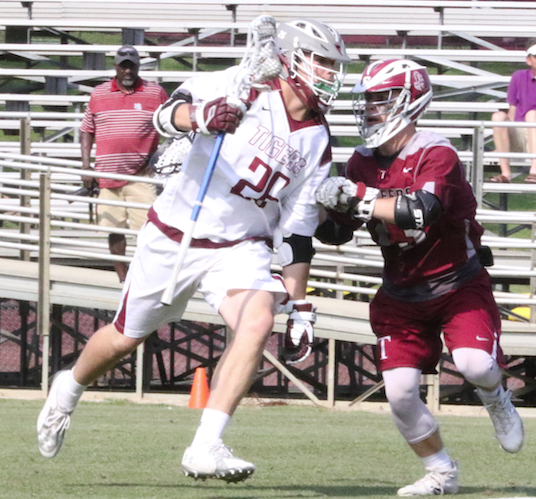 Wednesday marked the Hampden-Sydney College (H-SC) lacrosse team’s first NCAA Tournament action since 2003, but the Tigers were unfazed by the moment, blowing out visiting Transylvania University 23-8.

It was the third NCAA Tournament victory in program history for the Tigers, who will now hit the road to play the defending NCAA Division III national champions Saturday — Salisbury University.

H-SC jumped out to a 10-1 lead in the first half Wednesday and outscored the Pioneers 11-3 in the second half.

“I think we got out in transition,” H-SC Head Coach Jason Rostan said, identifying the key to the victory. “We were able to run a little bit. Our face-off guys have been great this year, and I think that was huge for us.”

“He really put the ball away, did a great job for us,” Rostan said.

The coach also praised his goalkeepers.

“Nick Arcuri and Mitch Renfrow kind of split time today, and I thought they both made some really good saves in there,” he said.

On hand to see his son and H-SC triumph was Ray Rostan, who retired last year after a historic 32-year run as head coach of the Tigers.

“I couldn’t be more proud of the team and the coaches, and it’s just been really a blessing the way the season has gone,” the elder Rostan said.

After guiding his team to a conference championship Saturday and having his second child and first son born Monday night, Jason Rostan now prepares for Salisbury.

“I just feel like we’ve really come on as a team in the last two weeks, and I can’t wait,” he said. “I know the guys are excited.”