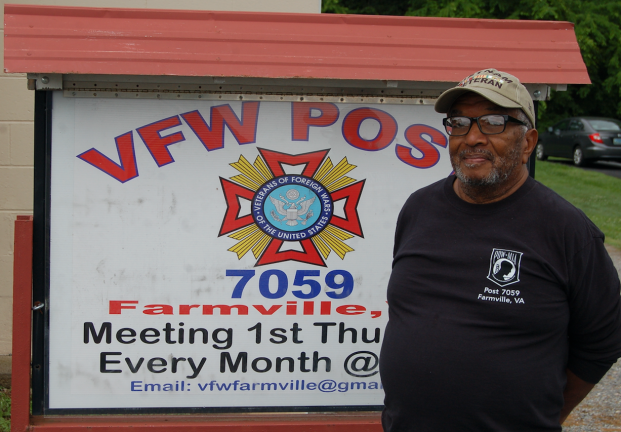 ‘Through hell and back’

Vincent Earley, a Purple Heart recipient who served in the Vietnam War, gets a certain feeling when placing American flags on graves of his fallen servicemen and women.

Farmville VFW Post 7059, of which Earley is a member, places flags on veterans’ graves at two Farmville cemeteries for Memorial Day.

Veterans will honor the fallen with flags Saturday at 8:45 a.m.

Representatives from the Post will attend the Honor Ceremony at the Amelia Veteran’s Cemetery on Memorial Day, Monday, at 10 a.m. and will present a short program for veterans at The Woodland at 2 p.m. that afternoon.

“We do things to help, and I think that that’s been a great help to me,” Earley said. “I enjoy doing it, and it’s something that has a purpose behind it.”

Earley was wounded in June 1969 during the Vietnam War. It was a day after the reconnaissance mission he was on had been ambushed resulting in several people being wounded and killed.

Earley describes the scene of having to return to the ambush site to recover the bodies of those who had been killed in action.

“When we went back to that area to get those bodies — I believe it was two bodies — they had been booby trapped,” Earley said, citing the bodies had improvised explosive devices attached to them.

He said he was injured and two others were killed during the rescue mission. Earley was back to active duty by September.

Frank Medlin — another member of the VFW Post, a Vietnam Veteran and a Purple Heart recipient — gave a similar account of his membership to the VFW.

“The VFW helps vets; they do what they can with the means that they have to do it with.”

“You know, it’s gotten easier, because I’m with other people that’s in the same position, or similar position that I’m in … We went through hell and back, so to speak, and we try to comfort one another,” Medlin said.

He said if he has a crisis or episode, all he has to do is pick up the phone and call the Post Commander Fred Hill.

“I guarantee you that there’d be three or four fellow comrades out here to help me, whatever I needed to be done,” Medlin said.

Medlin was wounded during the Tet Offensive, known as a campaign of surprise attacks from the Viet Cong that took place from January to September 1968.

“It was about 8 o’clock at night. I was a UH1 helicopter mechanic,” Medlin remembers. “I just landed from test flying a chopper, and I started to pull a pre-flight on a next chopper to be flown to be tested, and all hell broke loose, so to speak,” Medlin said. “Next thing I know here I am hit laying in the back of a military truck and gunfire going around, and (I have) no weapon.”

Medlin said the incident lasted for “what seemed like an eternity.”

“There were a bunch of people that were wounded, a lot of soldiers got killed that night, a lot of civilians that got injured that got killed also,” Medlin said.

Medlin recalled being in the hospital for about 6-8 months.

He said after finishing his tour of duty in August 1969, he came home, along with other Vietnam veterans, “banned by the American people that sent us over to defend our country.”

Medlin said if he had to go back in time and choose again to fight, he’d do it again.

He said now, 50 years later, people walk up to him if they know he’s a Vietnam veteran and thank him for his service.

After coming home, he was awarded 10 percent disability for his combat wound up until 2010 when his disability was elevated, due in part to Post Traumatic Stress Disorder, diabetes and other issues.

“The flashbacks, I sit up at night in bed, and then I get woken up by the flashbacks, and I then realize what’s happened, and I go through that several times a month,” Medlin said. “…The Purple Heart’s not worth it, you know. It doesn’t ease the pain; it doesn’t ease the memory. It’s just a recognition that our government gave to us for our sacrifice.”

According to the Defense Casualty Analysis System data on the National Archives website, the U.S. had 58,220 casualties during the Vietnam War. The war spanned from 1955 to 1975 and saw 9,107 war veterans die in accidents, 1,201 declared dead, 5,299 died from wounds, 236 died from homicide, 938 died from illness, 40,934 who were killed in action, 32 presumed dead whose remains were found, 91 presumed dead whose remains were not found and 382 whose deaths were self-inflicted.