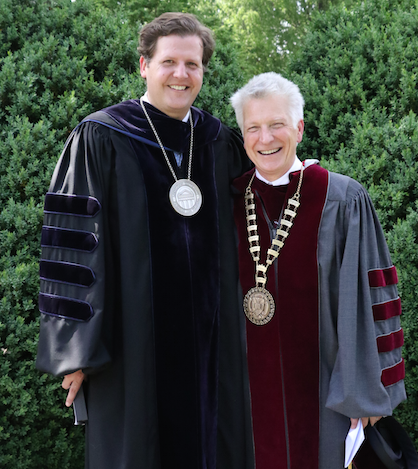 During a ceremony highlighting the importance of character, strength, courage and action, Hampden-Sydney College (H-SC) inaugurated Dr. John Lawrence “Larry” Stimpert as its 25th president Friday afternoon on the school’s campus in front of Venable Hall. 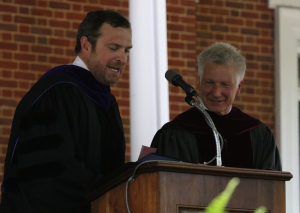 Stimpert delivered a speech entitled, “Be Strong and Courageous, and Act,” quoting King David’s instructions to his son Solomon in 1 Chronicles 28:20.

“I want to suggest that this passage offers an appropriate allegory for this great college at this particular moment in its history,” Stimpert said. “Like David preparing to die and turning responsibility for the construction of the temple over to his son Solomon, this college is in a moment of transition.”

Stimpert deflected emphasis from himself to the college’s legacy and destiny.

“The importance of today is not that I am becoming the 25th president of Hampden-Sydney, but rather presidential inaugurations are important because they are an occasion for marking the transition from what has been to what will be,” he said.

Among the many elements of H-SC’s rich legacy that Stimpert highlighted, he mentioned the school’s first president, Samuel Stanhope Smith, and Smith’s vision of a college for the sons of patriots. Stimpert mentioned Patrick Henry and James Madison, charter trustees of the school, and other important figures that impacted its development, like William Henry Harrison and Jonathan Cushing.

Referring again to 1 Chronicles 28, he said, “If David in this scripture represents all that has gone before us, then Solomon and the temple represent all we will become and how we will fulfill our mission to form good men and good citizens in the future.”

Stimpert identified three key messages for H-SC communicated in 1 Chronicles 28, the first being the importance of plans. 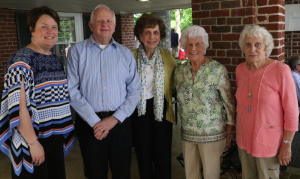 TITUS MOHLER | HERALD
Family members of Dr. Larry Stimpert were on hand Friday for his inauguration as the 25th president of Hampden-Sydney College. They included, from left, Natalie Pley, Larry Jahn, Gloria Jahn, Mary Kay Stimpert, who is Stimpert’s mother, and Norma Schertz. To see her son be inaugurated, Mary Kay Stimpert said, “It was amazing. It was a perfect, perfect day for it, wasn’t it?”

“Just as the scripture describes in great detail the plans for the construction of the temple, we are now developing plans for enhancing every aspect of our students’ experience,” he said.

Noting the necessary scope of these plans, Stimpert quoted former Swarthmore College President Courtney Smith when he said, “‘It is not enough to develop intellect, for intellect by itself is essentially amoral, capable of evil as well as good. We must develop’ — now listen to this — ‘we must develop the character which makes intellect constructive and the personality which makes it effective.’”

The second key message Stimpert cited from 1 Chronicles 28 was that the building of the temple was a collective effort.

“This college deserves outstanding leadership, and I pledge today to do my very best to provide you with that leadership,” he said. “But one of the great ironies of leadership is that the higher one goes in the organizational hierarchy, the more one depends on the efforts of others to accomplish important goals. We all have key roles in fulfilling this college’s destiny.”

The third key message Stimpert shared from the scripture passage was that facing the future requires courage. He noted that well-equipped, prepared leaders are needed to address the daunting challenges faced by society today.

“Our essential work, work that we have done in the past, work we do today but most certainly work we must continue doing in the future is to prepare good men and good citizens to be these leaders,” he said. “Our college’s most important days are not in the past but they lie in the future.

“The last 242 years are a remarkable legacy, but they are only the preparation for the fulfillment of this college’s destiny, and that destiny is limited only by our aspirations for it,” Stimpert said. “Let us be strong and courageous and act on those aspirations as we together chart an ambitious future for Hampden-Sydney College. Thank you for asking me to lead this effort as Hampden-Sydney College’s 25th president.”

Prior to the president’s speech and the inaugural address by noted historian Fergus M. Bordewich, formal greetings were offered to Stimpert through speakers representing friends, students, faculty and staff and alumni. The speakers provided testimony of Stimpert’s character as a man and his fitness as a leader.

Speaking on behalf of Stimpert’s friends was Mike Edmonds, dean of students and vice president of student life at Colorado College.

“Larry lives what he preaches,” Edmonds said. “The truth is, Larry is not a great leader in higher education because he’s good at it or because he’s smart. He is because he loves what he does, and he sacrifices to help others reach their potential. He is a true servant-leader. The truth is, Hampden-Sydney, you are an extraordinary steward of the liberal arts, and you have chosen a formidable person to lead you forward and to carry on this tradition. Godspeed, my friend, Godspeed.”

Caleb Mize, a senior at H-SC and President’s Men chairman, spoke on behalf of the college’s students.

“As we move forward, I believe it is imperative to stay true to our traditions and values while also developing others in order to make our institution run efficiently as possible,” Mize said. “I fully believe that President Stimpert is a perfect fit to make these changes while preserving our beloved history and reputation. As I’ve been able to speak with him about issues facing our school, I’ve learned much about his character and have found him an utmost respectable man. President Stimpert cares about every aspect of this college, starting with the students.”

“For 242 years, we have honored our mission to form good men and good citizens in an atmosphere of sound learning,” she said. “One constant has been — and must remain — the institutional support for the student-teacher relationship, which constitutes and nourishes the heart of that mission. I mention this because while it seems obvious, it is a gossamer notion and could easily be upended with shifting institutional priorities. But happily, President Stimpert has mentioned both in a recent letter in The Record and elsewhere that he sees our mission as distinctive and compelling, indeed that he intends to ‘double down’ on it, to which I say let us, a little bit later, raise a glass of the finest.”

Speaking on behalf of staff and alumni was Thomas Shomo, former director of marketing and communications at H-SC.

“Dr. Stimpert stands in a long line of Hampden-Sydney presidents who have been strong because they have valued and exemplified what makes the college strong,” he said. “I have served six of those good men, and I still measure each against (W.) Taylor Reveley (II) … With humility, determination, grace and a devotion to the historic mission of the college and his Christian faith, he guided Hampden-Sydney through a turbulent and challenging time in higher education, and he was not afraid to make the changes necessary to meet those challenges. I see these qualities in Larry Stimpert.”

Following these greetings, Bordewich delivered an address entitled, “History and Character in Time of Trial.”

“Increasingly, it seems, Americans are fracturing culturally, economically, politically and spiritually,” he said. “Anxiety, discontent and distrust of our fellow Americans have become the common currency of public discourse. … We might be forgiven for believing that the nation is at one of the most dire points in its history.”

“It’s worth remembering that when George Washington took the oath of office at his first inauguration, onlookers could see that his hands were shaking, and it wasn’t because of age,” Bordewich said. “He wasn’t that old. It was because he feared that he wasn’t up to the task that he faced.”

Moments into his speech later in the inauguration, Stimpert said, “Fergus, my hands are shaking, too, for the same reason Washington’s hands were shaking.”

Before finishing his speech earlier in the ceremony, Bordewich said, “When we despair, we would do well to turn to Madison and Washington, Henry Clay and Abraham Lincoln, Martin Luther King and others like them who brought common values of fairness and tolerance to the political world, the world that we live in. All of them faced crises that tried their souls.”

The chairman of H-SC’s board of trustees, M. Peebles Harrison, administered the investiture of President Stimpert.

Providing music for the inauguration were the Hampden-Sydney Men’s Chorus and the Prince Edward County High School Band, the latter of which includes both of Stimpert’s children.

Volunteers seek to sharpen their skills

Some volunteer firefighters from the Heart of Virginia reached new heights Saturday in a very literal way. Volunteers from Farmville,... read more