When you mention the Natural Bridge, most people don’t think of hiking trails, but there are three at the relatively new Natural Bridge State Park. The easiest trail, Cedar Creek, goes under the bridge and has an amazing ecosystem rich in wildlife — queen snakes, Northern water snakes, American bullfrogs, three species of woodpeckers, screech owls, butterflies and wildflowers. 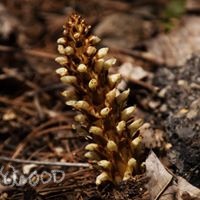 Squawroot resembles a small pine cone or ear of corn.

I went hiking there several weeks ago and found one of my favorite plants just after entering the trail. Squawroot or bear corn (Conopholis Americana) isn’t particularly common in the Piedmont, but venture closer to the mountains and this distinctive plant is easier to find.

Squawroot doesn’t have chlorophyll or conduct photosynthesis. It’s heterotrophic, meaning it’s completely dependent on an outside source for all nutrients; in this case, the roots of several species of oak trees. Recent research indicates that squawroot may be part of a three-way relationship involving oak trees, squawroot and mycorrhiza in the soil.

Squawroot is cream- to tan-colored and looks a bit like a miniature ear of corn emerging from the ground, and it’s often one of the first plants that bears forage after emerging from hibernation, hence the name bear corn. It’s called squawroot because Native Americans used it to treat the pain of childbirth and the symptoms of menopause.

Squawroot spends most of its life underground and only emerges when ready to reproduce. When mature, seeds hit the ground and sprout, they burrow into the earth in search of an oak root. If successful, they attach themselves and draw nutrients. Over time, a knobby growth forms at the site of the attachment, but it apparently doesn’t hurt the tree. After about four years of underground growth, a pinecone (or small ear of corn) shaped flower stalk emerges above ground. It doesn’t have any leaves, just tiny scales under each flower that are the remnants of true leaves. The cream-colored flowers do not contain nectar and may be self-pollinated. Seed capsules follow pollination; they eventually split and disperse thousands of tough seeds capable of surviving for at least 10 years. They germinate when they “sense” chemicals given off by the roots of oak trees, their appropriate host plant. And so, the cycle begins again.

Squawroot is usually found growing in patches of four to eight plants. The inflorescence darkens as it ages. By the end of the summer, it may even look as if it’s been burnt.

As so if you can’t visit Natural Bridge State Park this spring, there will be a new bounty of wildflowers in the fall, and you can still look for squawroot.

Thomas Jefferson said that Natural Bridge was one of nature’s most sublime wonders and that it must have been created in a war between river and mountain. He was so impressed with it that he purchased it from King George III and wanted to build a cabin there. It’s a beautiful state park. You won’t be disappointed.