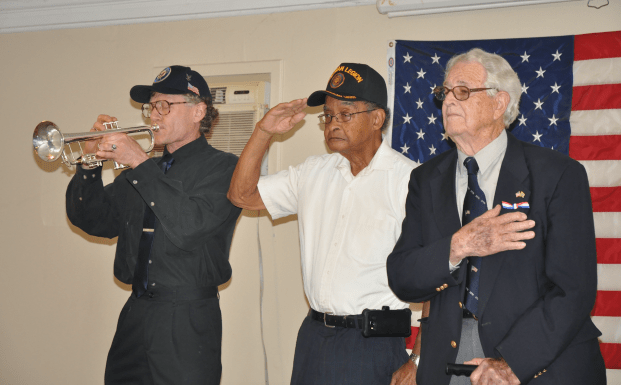 Despite grenades being hurled toward them, gunfire ringing amid shouts for help and enemy forces quickly advancing, medics in Vietnam sacrificed their lives to save others in the line of duty.

The lives of the 15 medics in Vietnam who received Congressional Medals of Honor — seven whom received their honors posthumously after being killed in combat — were honored and remembered during the 27th annual Buckingham County Memorial Day Observance, sponsored by the county’s Ruritan Club.

“Freedom is not free,” said Marie Sweeney, who presided over the ceremony. Sweeney served in Vietnam for one year as an army nurse.

Before Sweeney began her presentation at the VFW Hall amid a large crowd donning red, white and blue — many of whom held small American Flags handed to them as they entered the building — Joseph Anthony performed the national anthem on his trumpet. He’d later play “Taps” at the conclusion of the program.

“These incredible men were extremely valiant and never once did they consider their own safety while attending to render their aide to their comrades. They are truly inspirational individuals,” Sweeney said.

“When three soldiers from the company fell from being hit by well-fortified enemy positions, he left his covered position and ran through … heavy fire to give aid and returned them to a safer position,” Sweeney said of McMahon. “He was himself wounded by an enemy mortar. He refused medical attention for his wounds, and returned to aid another wounded soldier, but fell mortally wounded before he could render aid.”

Regarding Monroe, Sweeney said “one foxhole was hit immediately when his platoon was deployed in an ambush when their position was suddenly subjected to an intense and accurate grenade attack. He responded immediately to calls for help and he moved forward through heavy small-arms fire to the foxhole, but found that all had already expired.”

Monroe “then responded to other calls for help, going through deadly hails of fire. He … found a radio operator bleeding profusely from fragmentation and bullet wounds.”

After Monroe began to treat the wounded, she said, “he noticed a live grenade that fell directly in front of his position. He shouted a warning to all around him, and pushed the platoon sergeant and radio operator to one side, and lunged forward to smother the grenade blast with his own body and died as a result of this act of valor.”

Rascon, Sweeney said, ignored orders to remain behind shelter, “he made his way forward, trying to reach the severely wounded machine gunner, lying on an open enemy trail. After trying several times and being pushed back by intense heavy fire, each time he jumped to his feet, ignoring flying bullets and flying grenades to reach his comrade.”

Sweeney said he “intentionally placed his body between the soldier to protect him from further wounds and received a serious sound to his hips. He then dragged the larger soldier (from danger).”

Rascon, she said, covered another soldier with his body, absorbing him from the exploding grenades, “saving the soldier’s life.”

Rascon, she said, only allowed treatment of his own wounds after he finished moving and tending to wounded soldiers in the field.

Along with the Ruritans, sponsors of the Memorial Day event included American Legion Post 134 and the VFW Post 8446.

A single-vehicle crash Thursday in Prince Edward County resulted in one person being killed on U.S. Route 15 in the... read more