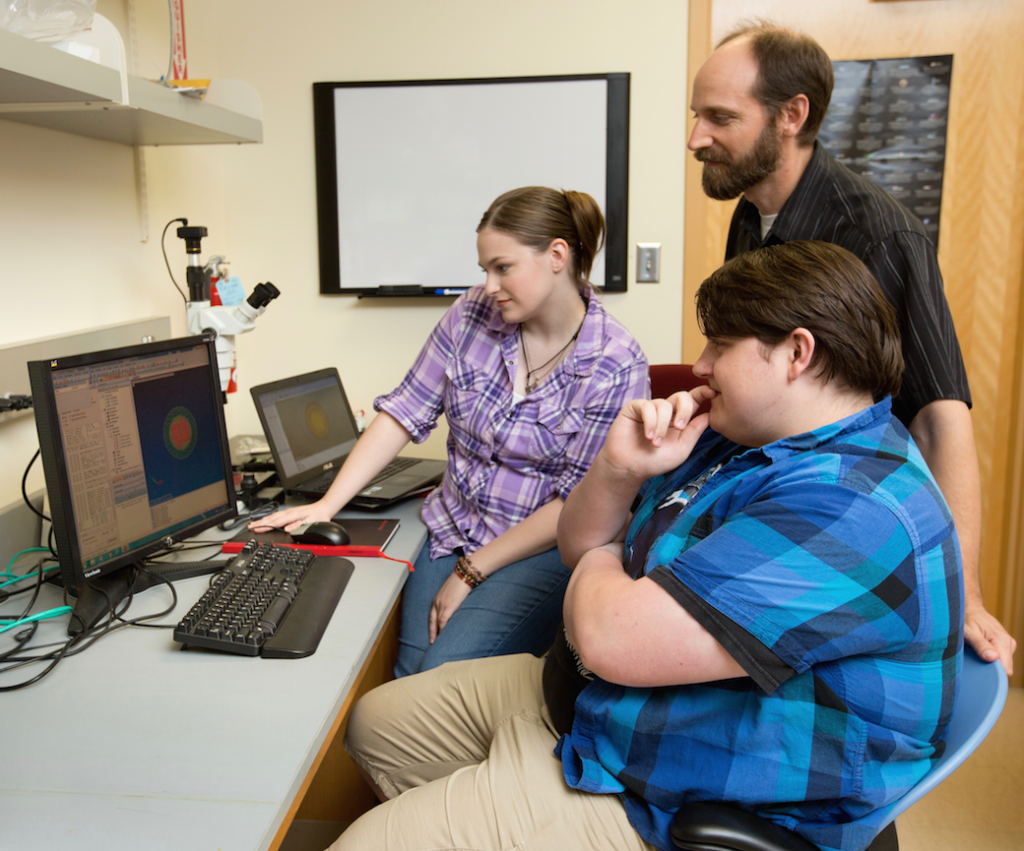 The universe has always intrigued Laura Deale and Bob Highley. In a research project this semester, they are not just gazing at the stars but making their own.

“The physics majors are building 3D computer models of white dwarf stars to understand how the composition of these stars affects their acoustic vibrations,” Longwood University officials said in a press release. “Changes in the models’ vibrations, based on their composition, will be compared with data from real white dwarf stars, which are studied because they offer clues on the mysterious identity of dark matter and the age of our galaxy. The research will be presented at an international conference in June.”

“You can study the composition of an object by looking at its vibrations. Changing an object’s composition or shape causes the vibrations to change as well,” Dr. Kenneth Pestka II, an assistant professor of physics, who is supervising the research, said in the release. “The models they’re building have different properties. We can examine differences in the models and compare them to the behavior of real stars.”

The students’ models are being used to understand how composition and crystallization affect white dwarf stars, including vibrational modes, surface velocity and variation in luminosity. These properties can affect a star’s brightness, according to the release.

“These students are learning material science, computational modeling and, most important, problem solving,” said Pestka, whose academic interests include physical acoustics and astronomy. “This is an opportunity for undergraduates to learn acoustics and material science by looking at stars. In this project, they’re using acoustics to understand a material, which in this case happens to be white dwarf star matter.”

“Highley and Deale have made about a dozen models using various ratios of crystalline carbon, oxygen and neon, the elements that make up a white dwarf star. The models were built using a sophisticated software package, Femap with NX Nastran that was provided by a renewable grant from Siemens. The software outputs the way a star will vibrate based on its shape and composition.”

Remnants of sun-like stars, white dwarfs represent the final evolutionary phase of 98 percent of all stars, according to the release. “The sun will become a white dwarf star when it dies in about 5 billion years,” said Pestka. Too dim and too small to be easily seen (only slightly larger than the earth), white dwarfs have burned up all of their nuclear fuel and are cooling off, though their surface remains white-hot.

“Because we’re studying the remains of something, this is like the anthropology of stars,” said Deale. “I want a career in research, so it’s exciting to get a taste of what I’ll be doing.”

Highley also has enjoyed the research.

“It’s been an enlightening experience that has deepened my understanding of astronomy and taught me research skills. I’ve also learned 3D computer modeling programs,” he said. “The software we’re using is complicated and thus time-consuming at first, but the more you use it, the more it becomes second nature.”

Both students grew up fascinated by astronomy and science fiction.

“My parents were Star Trek fans, and so was I,” said Deale. “I’ve always wondered, ‘If we could go out there, what would we find?’ I love to look at these things that are out there. I like the exotic objects you find out in the universe.”

One exotic feature of white dwarfs is their denseness, according to the release. “A teaspoon of material from Sirius B, one of the most studied white dwarf stars, would weigh more than 13 tons on earth.”

The researchers will build models in which they “ramp up the density to what we think is going on in these stars, packing in as much material as possible—which will be like building the ultimate ‘clown car,’” said Deale.

Pestka compared the project to “building a guitar, plucking a string and listening to the sounds. Once we’ve built this star, what does it look and sound like? In finite element models like this, you create a model composed of many small pieces, then you apply the laws of physics to each piece to understand the behavior of the whole. In this project, we are combining physical acoustics and astronomy, part of a field called asteroseismology.”

Pestka, Highley and Deale will present a poster on the project June 27 at a joint meeting in Boston of the Acoustical Society of America and the European Acoustics Association.