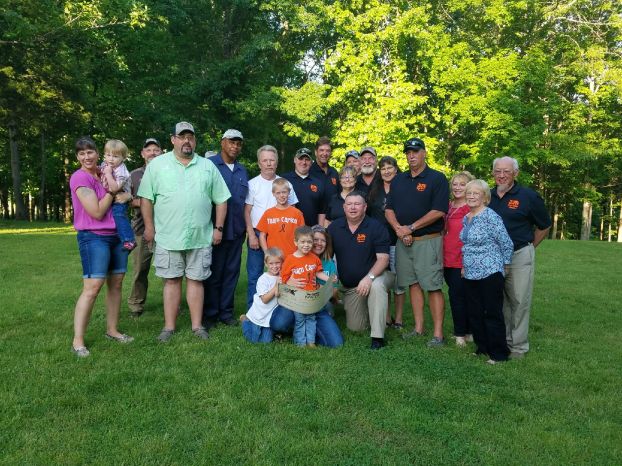 The High Bridge Strutters Chapter of the National Wild Turkey Federation (NWTF) recently hosted its 10th annual Hunting Heritage Banquet in Farmville. More than 400 outdoor enthusiasts attended the banquet. Each year the chapter selects a local child who has been diagnosed with an illness, to raise monies to assist the family. According to a NWTF press release, the funds help cover medical expenses and other costs they may endure.

This year’s recipient is Carson McCall. Carson McCall, 4, his parents, Jarrod and Terri, and brothers Clayton, 8, and Colton, 5, live in Red Oak, located in Charlotte County. In June 2016, Carson was diagnosed with Globoid Cell Leukodystrophy, also known as Krabbe Disease, which affects the nervous system. In Carson’s case, it affected his ability to walk. There is no cure for Krabbe Disease and most children diagnosed with early infantile Krabbe do not live past age two. Luckily for Carson, his was diagnosed with late infantile Krabbe and he was a candidate for a stem cell transplant.

The release cited that after the diagnosis, Carson’s care was moved from MCV to Duke University Hospital at the urgent request of the doctor, who had previously treated Carson’s cousin, Haley Duffer, for the same disease in 2011. “Carson’s appointments at Duke started June 27, 2016 and will continue for several years post-transplant. On Aug. 1, 2016, Carson was admitted after having surgery to have a triple lumen Broviack placed in his chest and started extensive chemo treatments that night.” According to the release, the chemotherapy was administered for nine consecutive days followed by a day of rest, and received his unrelated cord blood transplant on Aug. 11.

“To give a brief explanation on this type of transplants-the chemo wipes out all of the immune system to the point where white blood cells are considered non-existent and the bone marrow is gone from the body,” officials said in the release. “As the new cells start to grow, the bone marrow starts to regrow. Carson engrafted on Sept. 1, 2016, which meant his white blood count had shown enough growth over three consecutive days for assumption that the transplant was a success.”

According to the release, he was discharged Sept. 13, 2016 to the Ronald McDonald House of Durham and had to remain within a 10-minute drive of Duke. Finally, after 42 days in the highly restrictive hospital unit, that weekend, the family was finally able to spend the night under one roof.

“Carson was released to come home on Dec. 22, 2016, with the understanding that he was to be under strict limitations due to his compromised immune system,” officials said in the release. “The family removed all carpet from their main living space in order to reduce germs and to allow Carson mobility with his walker and wheelchair.”

The release cited that Carson was not allowed to have visitors other than immediate family, not allowed in public places, not allowed fresh fruits or vegetables and also has to strictly limit time in the sun.

“During their stay in Durham, Terri, who worked as a benefit program specialist at Halifax County Department of Social Services, had to resign in order to be Carson’s full-time care-giver,” officials said in the the release. “Together, they attend appointments at Duke, physical therapy three times a week and will soon start weekly occupational therapy and will receive Botox injections to his leg muscles this coming July.”

According to the release, if Carson continues to stay well from post-transplant complications, he will start the weaning process for his immunosuppressant medications around June and once he is weaned, he will restart his immunizations over as if he were a newborn. The family hopes that Carson will be accepted into the fall Pre-K program within the county in order for Carson to re-learn how to socially interact with others and adjust to being in a peer setting with his mobility equipment.

“As far as the progression of the Krabbe Disease, the team at Duke believes they have slowed the disease with hopes the one year post transplant studies will show no further damage has occurred,” officials said in the release. “Currently, Carson wears braces in order to hold his feet in a position that will allow him to do a small amount of walking using his walker.”

The release cited that prayers continue to be answered for this family as Carson, for the most part, has remained a fairly happy little man despite his new disability.

“During this year’s event, the High Bridge Strutters were able to raise $25,000 in donations in less than 30 minutes,” officials said in the release.

“This is by far the best thing we get to do each year. The outpouring of love and support shown each year by our donors and supporters is just overwhelming,” said Sammy Entrekin, High Bridge Strutters president in the release. “The money these folks give changes the lives of a local family each year. I could not be more proud of our committee for their hard work.”

A few years ago, I read the following from, “Jesus Calling” by Sarah Young: “The challenge that continually comes before you... read more