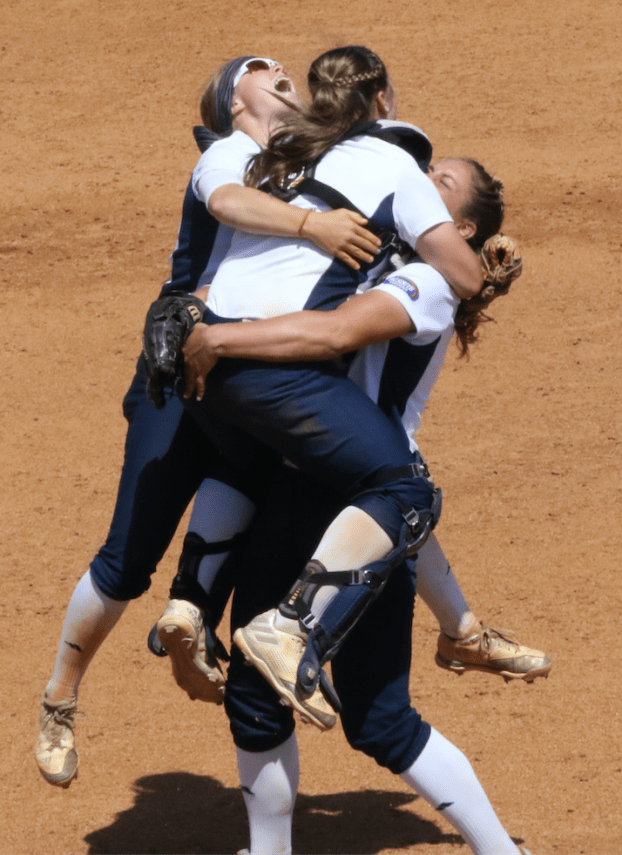 Lancers Head Coach Kathy Riley said, “It’s hard enough to get to championship day, let alone come out on top, so for us to be fortunate to win three in a row doesn’t happen all the time and (is) kind of (a) once-in-a-lifetime thing for a group like ours who is blue collar and hardworking.”

With the title, Longwood (28-27) secured an automatic bid to the 2017 NCAA Division I Softball Championship. The Lancers will travel to Tennessee to play as the No. 4 seed in the Knoxville Regional, which runs May 19-21. 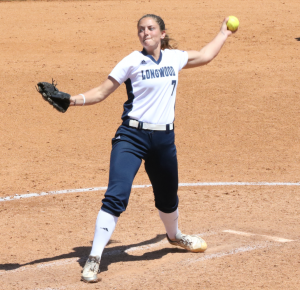 McCarthy was named Most Valuable Player of the Big South Softball Championship. A historically-great Lancer, she capped off her strong performance throughout the tournament by pitching a complete game Sunday, allowing five hits, two runs (one earned), two walks and throwing four strikeouts in her final appearance at Lancer Field.

“I don’t think many people can say they won a championship on their home field the last time they played there, so it’s pretty sweet,” McCarthy said.

With the win, she improved to 14-8 in the circle this season, notching three wins in the tournament, including two complete games.

“I think it was appropriate again that she had the opportunity to lead her team as a senior,” Riley said. “She obviously helped us all three years before that (to) get to a good place. And a couple times she did not get to pitch the final game, and for her to come in the final game and throw all seven innings and pitch a gem, I couldn’t be happier for an individual on our team. And she really deserves that. She has a lot of not only Longwood records but Big South records, so it’s nice to see her enjoy some of the fruits of her labor.”

The Lancers took a 1-0 lead in the top of the second inning when sophomore right fielder Jessica Smith doubled to deep left field, scoring junior third baseman Krista Kelly. The Flames took advantage of a Longwood error in the bottom of the inning to tie the game.

In the top of the third inning, sophomore catcher Kaylynn “Bug” Batten was walked, sophomore center fielder Jordan Clark singled and redshirt sophomore Karleigh Donovan singled to load the bases with only one out on the board. 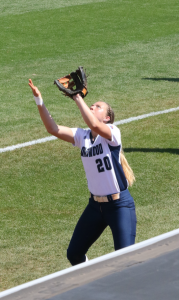 An error by Liberty on a play at home plate allowed Batten and Clark to score. Not long after, a bunt by Kelly helped freshman pinch runner Leanna Toler beat the throw to home to give Longwood a 4-1 lead.

The Flames scored off a double to left field in the bottom of the sixth, but it was last run the Lancer defense would allow.

In the bottom of the seventh inning, Longwood had to face Liberty’s dangerous freshman twin duo of Amber and Autumn Bishop. Junior left fielder Glenn Walters caught a fly ball by Autumn Bishop, and Carr fielded the grounder by Amber Bishop and tagged first base before she could reach it. For the final out, the ball arced high into foul territory on the first-base side, Carr was there to meet it and the celebration was on.

“Today was the best we did in regards to coming out and just battling all the way through the game,” Riley said. “And it wasn’t like that we were not like that in other games in terms of having excitement … but sometimes we (would) wait for things to happen to see if we were going to be excited or not. Today, we didn’t care whether we made an error or what was going on in the game. We were going to be involved from pitch one to the very last pitch, and that’s the way we approached it today, and it was just a lot of fun to be involved like that.”

Donovan led the Lancers on Sunday with two hits, and for the tournament, she had compiled six hits total, five RBIs and three runs scored.

“I thought Bug had a good tournament, too, all the way around,” Riley said. “She was really an emotional leader for us the entire tournament. Not only behind the plate did she do a great job and keep her composure, but at the plate. … Her at-bats were always the best at-bats of anybody that we had on the team, because she has not only a great eye, but she was here to win this weekend, and I think it was inspirational for our team.”

Augustine finished the five-game stretch with four hits, including a solo homer, and five runs scored.

“If you look at Justina, she hasn’t played short for that long and while there was a couple mistakes in there, I think a lot of that’s just due to inexperience,” Riley said. “Had she played there two or three years, it’d be totally different. She’s played outfield since she’s come here, and for her to go over there in the last four or five weeks in the season and play shortstop, pretty phenomenal job. And those things glued us together. Older players do glue to you together, and I think it happened this weekend.”

Addressing what she will remember most about her four-year career at Longwood, Augustine said, “Probably today, to be honest. This has probably been like the biggest moment, winning for the third time, being here with all of our fans and family, being on our home field — it’s amazing.”

In their first shot at the title, Longwood fell 9-3 to the Flames in a rematch Saturday night. But since it was the Lancers’ first loss in the double-elimination tournament, they got another opportunity to claim the conference crown Sunday.

In the NCAA Tournament, the Lancers will first face host and national No. 8 seed University of Tennessee (44-10) on Friday at 7 p.m., with the game set to be broadcast on ESPN2. The other teams playing in the Knoxville Regional include University of South Carolina Upstate (44-11) and Ohio State University (35-16).