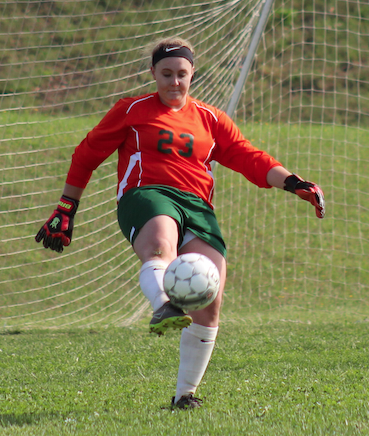 With their 1-0 victory over visiting Cumberland High School on Wednesday, the Buckingham County High School varsity girls soccer team has now won four out of its last six games.

The successful run provides a reminder that this is largely the same Lady Knights team that went 6-6 in its inaugural season last year, winning a playoff game against Dan River High School.

Speaking over the weekend after his team had just won three out of its last four games, Buckingham Head Coach Russell Taylor said that everything was looking good at the moment.

“They’ve been playing really well,” he said of the Lady Knights. “We started a new formation probably a couple weeks ago, and ever since then, they’ve really picked it up well.”

Taylor described the new formation as a one-four-one-three-one, with the majority of those 10 field players focused on defense.

“It’s something I really … drew up just trying to figure out something because teams were just getting in behind us too easily,” he said.

Noting that he moved a couple players, Taylor said, “We actually have an extra defender now. We’re playing with a sweeper instead of just a flat defense. And my sweeper’s Macie Crotts, and she’s killing it back there. She’s doing really well.”

The coach said that his offense usually comes from three or four girls, “so I figured I’d just let them run with that.”

That group of girls includes senior midfielders Rachel Temple and Samantha Aldridge and junior forward Sarah Whittington, with junior Destiny Sutton in the mix most of the time and occasionally sophomore Angelina Smith, Taylor said.

Though Buckingham (5-6-1) got off to a slow start this season, Taylor said he did not think it was because the girls felt any pressure after a strong 2016 season.

“They know it’s their second year and a lot of them never played before … we (were) just slow (getting) off the ground,” he said.

Karleigh Donovan did not waste time in letting Longwood University softball fans know what she could do at the plate,... read more