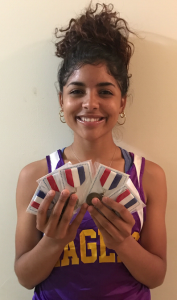 “We stress with the kids that it’s not just the first places but it’s those other places down through there that really help you to win this stuff,” Baker said, as points were claimed by anyone or any relay team placing in the top six of an event.

“The only (girls field) event that we didn’t place multiple people in was the high jump, and Makayla won that, so it was an overall, strong performance,” Baker said.

The Lady Eagles finished with 154 points after the track events, as Goochland High School took second with 117.5.

Booker produced a new personal record in the girls 300-meter hurdles, which she won with a time of 50.04 seconds.

Of her title wins, Booker said, “I thought I could be able to do it, because I’ve been doing it in practice and started doing it in the invitational meets consistently, so I guess it was just a time to shine and not be nervous.”

Cumberland’s boys team won with 130 points, and Prince Edward’s boys tied for second with Bluestone High School as each team had 92 points.

“I felt… wow, I don’t have the words for it,” Cumberland Head Coach Kenneth Jasey said of the Dukes’ performance. “I’m proud of them, extremely proud of them.”

Conference championships for Buckingham, Cumberland and Prince Edward are this week.