Two high school students with direct lineage to men and women affected by the public-school closings in Prince Edward County have received first-of-their-kind scholarships from the Moton Museum’s Moton Family Challenge Scholarship Committee, according to a press release from the museum.

Jasmine Senae Woody, of Richmond, received one of the two scholarships. She is the granddaughter of William “Billy” Eanes, according to the release. 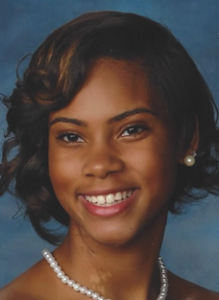 The $2,500 scholarship is merit-based and renewable to full-time students for a maximum of three years after the initial award, according to the release.

“I was really surprised and grateful, because of what the scholarship was for and knowing that I got it because of something that my grandpa had to endure,” Woody said. “It made me feel really good about it.”

Students who applied for the scholarship wrote a 500-750-word essay discussing the impact of the schools’ closing on their family members and how it affected their own pursuit of education.

Joy Cabarrus Speakes, chair of the Moton Family Challenge campaign, said the initial scholarship had been for $500.

“(Barrye) also expressed other things that he would want to do to … (such as) help Prince Edward to be a beacon as far as public education,” Speakes said. “I was really overwhelmed and impressed with what they did.”

Woody, a student at John Tucker Randolph High School, wrote her essay about Eanes, her maternal grandfather, who was one of 21 children.

Eanes, according to her essay, was also one of hundreds of African-American students who were denied an education after public schools were closed in Prince Edward County.

Once schools reopened, Eanes received a job at a Safeway grocery store. The manager had told him he could no longer work at there if he dropped out of high school. Despite having the gap he received in his education, Eanes went on to graduate from high school in 1967. Eanes went on to become a successful business owner, operating several restaurants in the Farmville area, according to her essay.

Woody said she had gotten “lucky” receiving the scholarship.

“I know my grandpa and so many others went through such a hard time, but (I know) their hard times have allowed me to succeed with something that they couldn’t do,” Woody said. “Everything happens for a reason.”

Dove’s essay discussed the distrust and impact between the white and black communities following Prince Edward County’s decision to close its public schools, particularly the impact through his grandmother, Deloris Earley.

Earley and her siblings were forced to separate following the closing of the schools in order to receive an education, his essay indicated.

Earley, Dove’s essay cited, was sent to Hampton to live with relatives at 13 years old.

The stark adjustment to a completely different school, a different daily routine and being separated from her family and friends made Earley feel alone and isolated from her home. This may have been, according to the essay, why Earley may not have pursued post-secondary education.

Dove’s essay said his grandmother’s story and the story of many others affected by the closings inspired him to also be resilient during difficult times and continually shows him how important education is.

Dove, who currently attends Martinsburg High School, has been accepted to West Virginia University, and will begin studying in the fall.

Speakes said the essays struck her in a “positive, very positive” way.

Woody, who will attend Old Dominion University in the fall to study nursing, said her reaction was one of surprise when she was notified of the scholarship.

Speakes said the essays show how much education means to the recipients.

“It also shows, from their essays, that something that starts out bad can end up good,” Speakes said. “Because, this way, I think pursuing and continuing their education means so much more.”