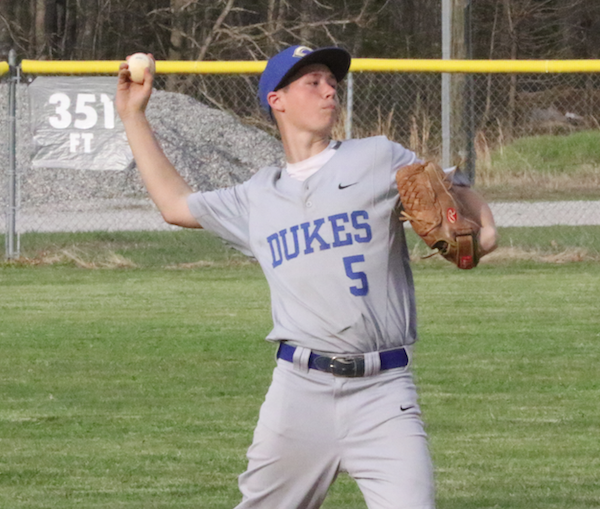 Cumberland High School’s (CHS) varsity baseball team started a busy week with a 7-1 loss to visiting Blessed Sacrament Huguenot Catholic School on Tuesday, putting the struggling but growing Dukes at 2-10 for the season.

Dukes Head Coach Paul Nelson acknowledged his team’s record Tuesday morning, but he added that “I’ve been impressed with the growth of many of our players over the course of the season.”

Speaking to the team’s struggles, he said that it has been fairly consistent in its inconsistency, alternating well-played and poorly-played games.

“I’ve been happier with our offense as of late, as we have five players batting .300 or higher, but we’ve lacked timely hitting with men on base,” Nelson said. “We need to do a better job of getting those runners in when it counts.”

It has not helped that the Dukes have been deprived of some of their experienced players.

Nevertheless, the coach said he has been impressed with his team’s consistent effort level in practice and the mentality it brings to game preparation.

Nelson started a list of standouts with senior center fielder Brandon Leabough, noting Tuesday morning that Leabough had a .385 batting average and a .500 slugging percentage and was playing incredible defense.

Praising sophomore catcher Cole Fillman, the coach said he “has done an amazing job behind the plate and has shown experience beyond his age.”

On offense, Fillman had a .318 batting average and a .423 on base percentage as of Tuesday morning.

Nelson said that Cumberland’s pitchers have been solid overall this year, but they have walked too many batters.

“Senior Dustin Clark has really solidified our rotation and is a reliable pitcher I know I can go to in any spot and he will deliver,” the coach said.

Joining Leabough in providing outstanding defense in the outfield have been seniors Wyatt Long and Austin Hernandez, Nelson said, adding that the team’s overall defense has improved following a rough start to the year.

“Sophomores Tristan Stinson, Braden Gilman and Garrett Jensen have also made great strides and are on the upswing as our season heads into the home stretch,” Nelson said.

Junior Darius Kyle and sophomore Caleb Johnson, newcomers to the team, gained recognition from their coach for showing significant improvement and for making important contributions.

Speaking on behalf of Cumberland’s varsity and junior varsity (JV) baseball teams, Nelson said they were devastated by the recent tragic deaths of two fellow students, Michaela Woodson and Tyauna Woodson. Both girls were underclassmen who played for Cumberland’s junior varsity softball team.

As he has continued working with the varsity and JV baseball teams, “I’ve been impressed with how the players of both teams have grown together, and I couldn’t ask for a better set of young men to be part of the CHS baseball program,” Nelson said.