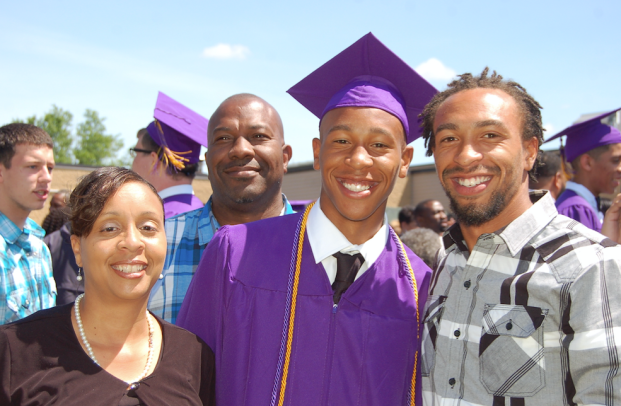 Graduates meet ‘the next phase’

Prince Edward County High School (PECHS) held its 2017 commencement ceremony Saturday where more than 150 seniors took to the stage to receive their diplomas.

“It’s my great honor to welcome you to the 2017 Prince Edward County High School graduation ceremony,” Deppen said. “All of you have contributed to this moment.”

She cited the countless number of hours students spent on homework and the encouragement of family and friends.

“Today we are gathered to celebrate the end of one journey and the beginning of the next phase of our lives,” Lutz said.

He noted even though it’d been voted that he and Deppen would be most likely to succeed during senior class superlatives, the simple fact that each senior present was graduating Saturday showed they had potential to succeed.

“The potential for success lies in each of us, but only we can take charge of our futures in order to find for what we are searching,” Lutz said. “It’s important to remember that our future is not limited by only our high school experiences. We each have had highs and lows. How we choose to respond to those experiences will determine our paths forward.”

Lutz told his fellow graduates to do their best to learn from shortcomings and negative experiences while always striving to be better people.

“Because you and I have something in common and because this is a special school in a special community in an important moment in time, you all have a particular opportunity going forward,” Rogers said.

She told graduates they were living in fractious times with a lot of anger and not a lot of room for reasonable conversation.

“You, because you grew up here in this special place, and because you attended this school, our school, you know you can’t label all white people, or African-American people or Hispanic people in a single way,” Rogers said, referring to the diverse community of PECHS. “You know you can’t say ‘All women this’ or ‘All men that’ … It is impossible to label an entire group of people based on a mutable characteristic. You know that because you know each other.”

Rogers said people across the country aren’t that lucky because they grew up in a bubble surrounded by people who reinforced their ideas about the world and don’t question their beliefs.

“You have to lead us to the future,” Rogers said.

Division Superintendent Dr. Barbara Johnson, said she was very proud of the graduates.

Johnson said she wanted the seniors to make sure they believed in themselves.

“Sometimes people will believe in you and sometimes they will not,” Johnson said. “You have to move forward knowing that what they think does not matter because you know who you are and you know your wonderful potential and your wonderful dreams.”