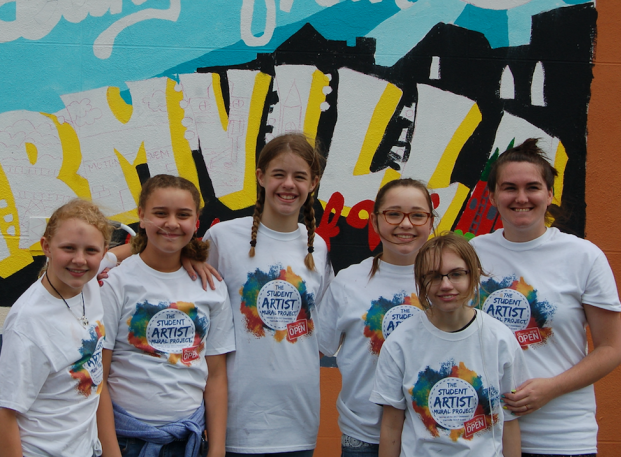 A majority of work on the mural took place Saturday during the Heart of Virginia Festival.

Magill said having her artwork on the gallery’s wall made her feel great. She said she’d been involved in art since she was in kindergarten. 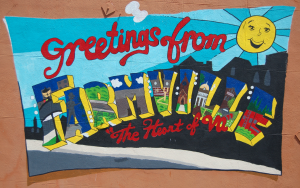 “I’ve always been into, like, postcards with landmarks inside the letters, and I thought that would look really cool as a mural, and (Prince Edward County Middle School teacher Carley Fetty) helped me come up with, like, how the words should go,” Magill said. 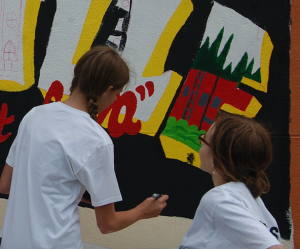 The project — Fetty’s idea — received a first place $2,000 grant from the Supporting Outstanding Urban Projects (SOUP) event that took place April 7 at the Longwood Center for the Visual Arts in downtown Farmville. The event was sponsored and organized by the Farmville Downtown Partnership.

“Before the SOUP event, because I really had a feeling it was going to happen, I had reached out to a few of the local art figures,” Fetty said. “I got the Lunenburg Middle School art teacher, who’s a friend of mine, one of the art professors at Longwood, Kerri Cushman, and then Todd Stonnell, who is an art therapist in Richmond, but he did a lot his studying here at the (LCVA). I put them together as my selection panel,” Fetty said.

She said as soon as the project won at the SOUP event, she put word out online that the project was taking submissions.

“We got three or four submissions, and because it was a very short deadline, I was, like, ‘We want to have this ready for the Heart of Virginia (Festival), so we have to choose it by the end of the week,’” Fetty said. “They had like a week and a half to get their art in. I did tell them, ‘You know it’s OK if it’s not a finished product, just show us what your idea is,’ and the panel reviewed all four and pretty unanimously chose this one.”

Fetty said there isn’t a deadline for the next mural.

“What we’re going to do with the entries is it’s going to be rolling entries,” Fetty said. “You can submit your artwork all year.”

Fetty said when the next space is finalized, the project organizers will take all of the artwork that has been submitted by that point — including pieces submitted during the previous application process — and put it into the selection process.

According to Fetty, the age range for those submitting projects is between 12 and 18.

Benchmark Community Bank (BCB) recently announced the promotions of six veteran members of its firm to compose the executive and... read more