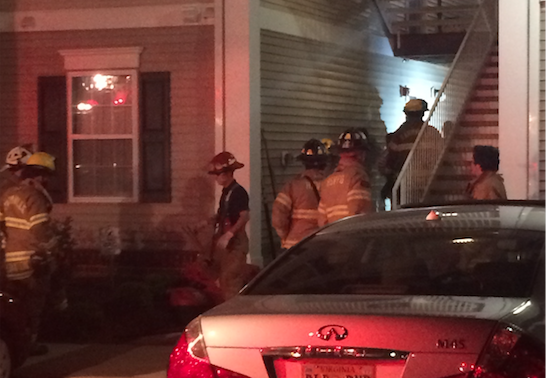 The fire was reported in Apartment G on the building’s second floor at 413 Sunchase Blvd.

Calls alerting the departments to the incident, according to Dean Farmer, acting chief of the Farmville Volunteer Fire Department, took place around 9:30 p.m. Farmer said responders were on scene six minutes later.

Sunchase leasing agent Maddie Elder, who lives in 411 Sunchase Blvd., across from 413, said she had seen the kitchen fire from her apartment. Elder said she called 911 at 9:27 p.m.

“I called while watching it happen,” Elder said.

Joe Nguyen, 47, was cooking chicken on the stove in the apartment when heated oil caused flames to rise up. Nguyen said he grabbed the pan and put it in the sink. By that time, however, Nguyen said alarms had begun to go off, and smoke had caused the sprinklers to begin spraying water.

“I shut down the stove, but then water came down,” Nguyen said, who noted the flames did not spread outside the pan.

Nguyen said he rents out the four rooms in the apartment and was the sole occupant at the time of the incident.

Farmer said there had been no smoke damage, but there was water damage in Apartment G and Apartment C, on the building’s bottom floor.

“There is extensive water damage to Apartment G and Apartment C,” Farmer said. “No smoke damage in either apartment.”

With a celebratory toast April 27 — one that included business owners, community leaders and supporters of downtown Farmville —... read more