Falcons take flight to next level 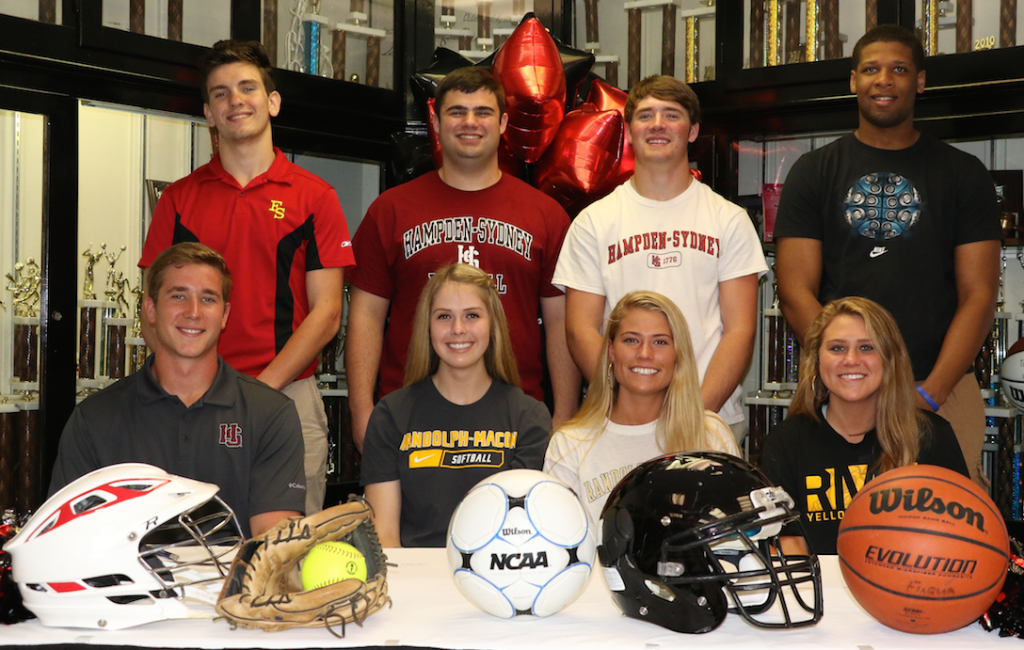 The college ranks are set to include eight more Falcons.

Three football players, two softball players and one each for basketball, soccer and lacrosse took part in a ceremony Monday at Gilmer Gym recognizing those committed to pursuing athletics at the NCAA Division III level.

“I think it’s outstanding that almost 25 percent of our senior student body is going to play at the next level,” Fuqua Athletic Director Charles Thomas said.

The three football players included Devin Allen, Nicholas Davis and Ed Newman, each of which is headed to Hampden-Sydney College.

The coach said Allen is probably going to make a transition from the quarterback position, since he lacks the height Tigers Head Coach Marty Favret likes in that position.

“But Devin’s a heck of an athlete,” Manis said. “He’s got incredible hands. He can throw the ball very well if that’s what they choose to use him with. If not, man, he’ll be a pain in the butt to catch in space.”

Manis described Davis as “the beast,” who will surprise his college coaches.

“They’re going to find out that he’s another guy who’s versatile, he can play both sides of the ball, but man, him on defensive line — he’s going to go until he absolutely cannot go anymore,” the coach said.

“Mary Grace has a tremendous amount of potential,” Fuqua Head Varsity Softball Coach Mike Ford said. “She’s a strong kid. For her size, she moves well. She’s got good hands on defense, has an above average arm and above average power. … I think she can have a great career there.”

Katie Haney participated in the ceremony but has not made a formal softball commitment yet, though she expressed interest in Randolph-Macon.

“I think Katie’s potential is through the ceiling,” Ford said. “She could play at (the) D1 level. I think she could play at a pretty high D1 level. But Katie’s been fighting, unfortunately, these knee injuries, and it’s cost her a lot of games over the last couple years.”

Haney said she will make a decision in the next couple of weeks.

“He’s worked very hard, put in a lot of time, specifically last fall before the season, to get himself to this level,” said Charles Thomas, Fuqua’s head varsity boys basketball coach. “So, I’m very proud of him. He’s an outstanding basketball player, but even better than that, he’s an outstanding young man, and he’s going to do a lot of good things with his life that are going to go way past basketball.”

Though Fuqua’s current soccer coaches have not been able to see Cyrus play due to her being injured, Chase Morrison, former Falcons coach, praised her versatility and mindset.

“I think her best quality from a coaching perspective is her willingness just to keep learning the game and developing herself,” Morrison said. “She’s a really incredible player, and I expect her to do big things.”

Falcons Head Varsity Boys Lacrosse Coach Patrick Murphy said, “He’s been our main face-off man for the last several years and done an outstanding job there … “Mike’s got an incredible lacrosse IQ, and he could play any number of positions for the Tigers.”