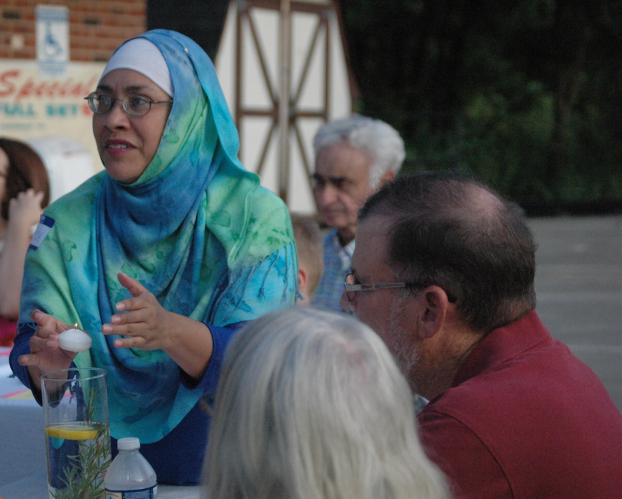 More than two dozen people gathered together to share a meal and better understand various faiths Saturday evening in Farmville.

The dinner was held outside of Kenny’s Healthy Living Emporium on South Main Street.

Kenny Albert, who owns the emporium, prepared a multi-course meal of rice and beans, a fruit and vegetable salad, chips and hummus and stuffed pita bread among other foods while Farmville residents representing Christianity, Judaism, Islam, Buddhism and those exploring different faiths engaged in conversation.

Patsy Watson with the Farmville Area Ecumential Association said the first interfaith dinner was held on the second floor of Mainly Clay.

Watson said the goal of the meetings, in addition to breaking barriers and forming friendships among people of different religious groups, was to make a positive difference in the community.

Watson said her goal is to host a communitywide dinner in downtown Farmville on North Street in September.

“We hope to move beyond breaking bread together to better understanding one another and coming together for a common action — a common goal,” Watson said.

“This is just the beginning,” Watson told those participating, “and I can’t wait to keep working with you as we keep moving forward.”

Rebecca Rider, a participant of the dinner, said she is no stranger to diverse religions.

Rider said she grew up in a majority-Muslim country and her parents are currently practicing Quakers.

Rider said she was excited to connect with people of different faiths.

“I’ve had a very mixed bag of experiences,” Rider said, who said she is not currently affiliated with one religion, “and I like hearing others’ stories.”

Lyndsie Blakely, minister of discipleship at Farmville United Methodist Church, attended the event with her family.

She said the chance to connect with different people for a shared goal was important to her.

“I think it’s just a wonderful opportunity to come together across religious traditions,” Blakely said.

Myron Owens, who attended the event with Patrice Carter, said he was excited for the group’s diversity and its goal toward acceptance over fear.

“A common respect for individuality and culture,” Owens said in response to what he hopes the event would bring. “What I appreciate is that (the event) is coming from all different groups and not only from one age or group.”

Patricia Carter, who attended the event with her family, said as someone who practices Islam, she was excited for an opportunity to unite as a community and gain a better understanding of faith groups.

“It’s really nice to keep an open mind and focus on similarities rather than differences,” Carter said. “We all have something positive to contribute to our communities.”