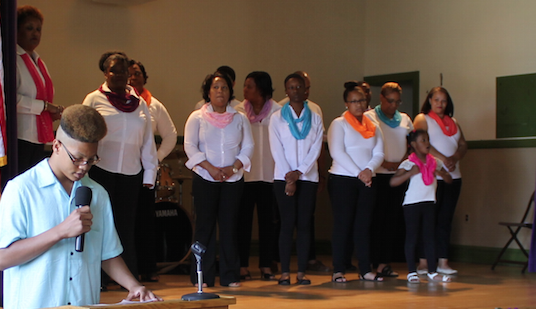 Many other students received outstanding youth awards in recognition of their success in both academics and good work in their communities.

The speaker for the afternoon was Dr. Basil Gooden, Secretary of Agriculture and Forestry for the commonwealth of Virginia. 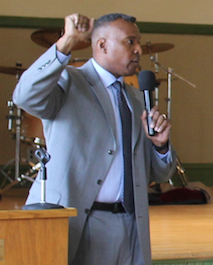 ANNA BULTROWICZ | HERALD
Secretary of Agriculture and Forestry Dr. Basil Gooden spoke on the importance of minority involvement in leadership positions around the country, noting that he was the only African-American secretary of agriculture in the country.

Gooden is a Buckingham County native, where he and his family own and operate a cattle farm raising Black Angus beef.

“There’s only one secretary of agriculture that’s African-American in any state in this country, and he’s standing before you,” Gooden said in his opening remarks. “There needs to be more people of color (and) more women, involved in leadership roles in agriculture and in general.”

“I remember what it was like for me as a young kid,” Gooden said. “I didn’t see many minorities in high positions. I think it’s part of my job to help cultivate the next leaders in agriculture and government. I’m honored to speak to young people of color to try and get them more involved in leadership roles,” said Gooden, who graduated from Buckingham County High School in 1982.

Before the awards and recognitions were handed out, Patricia Dean, a Delta Sigma Theta alumna, led the audience in a rites of passage litany to wish the award recipients the best, offering blessings to them in their futures.

“May they value education and see themselves as an important part of their nation,” Dean said.

The DST chapter presented its 2017 Outstanding Youth Awards to 30 students from high schools in Prince Edward and its neighboring counties.

Organizers also presented three scholarships to students who’ve excelled in the academic work and activities in the community.

Andrew Ford, a senior at Amelia County High School, was presented with the Skinner Braxton and Harris Scholarship. He plans to major in marine science at Coastal Carolina University.

Makayla Bacon, a senior at Randolph-Henry High School, received the Laverne Pervall Scholarship and plans to study kinesiology at the University of Virginia.

“It feels good to know that my hard work is recognized,” Bacon said.

A large crowd of friends and family filled the audience to support the young men and women, and the event concluded with cake and refreshments.

Delta Sigma Theta Sorority Inc., is a nonprofit organization made up of more than 200,000 African-American, college-educated women. The major programs of the sorority strive to encourage economic development, educational development, political awareness and involvement and physical and mental health in the community.