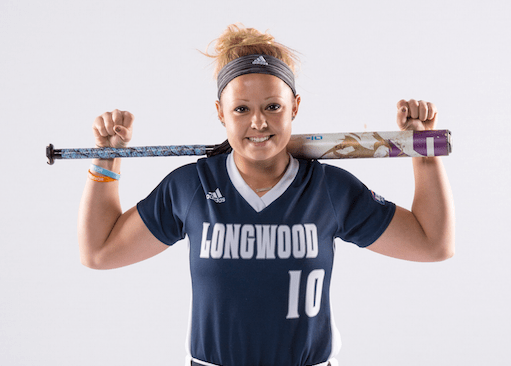 MIKE KROPF | LONGWOOD UNIVERSITY Longwood University redshirt sophomore Karleigh Donovan introduced Lancers fans to her prowess with the bat last season, and she is looking to remind them of that ability in the 2017 Big South Softball Championship this week.

Karleigh Donovan did not waste time in letting Longwood University softball fans know what she could do at the plate, and though she has struggled this season, her hard work is shining through.

As a redshirt freshmen in 2016, she finished the season with a batting average of .324, fourth-best on the team behind only the Lancers’ eminent seniors — Emily Murphy, Jamie Barbour and Carly Adams.

She helped the team achieve its second and third NCAA Tournament wins ever by contributing two hits and an RBI in each win. This helped propel the Lancers to their first-ever opportunity to play for an NCAA Regional Championship.

Her success and the graduation of Murphy, Barbour and Adams created some significant expectations for Donovan entering the 2017 season, and she has struggled to achieve what she had been hoping for. 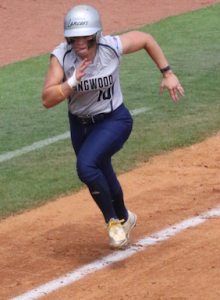 TITUS MOHLER | HERALD
Karleigh Donovan races down the baseline Wednesday moments before scoring the Lancers’ first run of the 2017 Big South Tournament, part of a 6-1 victory.

“I haven’t done very well this year like I did last year, which sucks, but I still work hard every day to try to get better,” she said. “That’s all I can do really at this point is hope that everything that I’ve done will pay off in the tournament.”

Through 49 games played this season, Donovan has a .255 batting average, again fourth-best on the team.

“Last year, I just kind of did my own thing, and this year, I had a lot of pressure on myself to step up and be one of the top people on the team, and I put too much pressure on myself,” she said. “So, it’s made my confidence level go down.”

But Donovan, like the Lancers, has started to reassert herself in the latter part of the season.

Longwood has won nine out of its last 10 games, and she has contributed to the successful run with her bat.

She helped the third-seeded Lancers get off to a strong start in the 2017 Big South Softball Championship on Wednesday by recording a hit and scoring her team’s first run of the tournament. These were key contributing factors in Longwood’s 6-1 victory over No. 6 Radford University.

It makes sense that Donovan is a difference-maker for the Lancers given her long history with the sport of softball.

“I was like 4 or 5 years old when I started playing,” she said, noting she played T-ball.

After that she moved on to Dixie Softball, and she has played for a variety of travel ball teams over the years, including the Richmond Diamonds.

Donovan played on the varsity team for all four of her years at Dinwiddie High School, where she was coached by Rick Beville.

As a high school freshman, she was a center fielder, and in her last three years, she alternated between third base and pitcher, pitching most of the time as a senior.

She took lessons from Kerri Cobb, and she estimates that Todd Morgan has been giving her hitting lessons for eight years.

Donovan signed her letter of intent to play college ball for Radford, and she was part of the Highlander program for the fall of her freshman year, but she said she wasn’t very happy there.

Explaining why Longwood jumped out as a good alternative to Radford, Donovan said, “Me and Coach (Kathy Riley) got along really well from the start when I got here.”

Donovan credited Cobb, who is good friends with Riley, with facilitating their relationship.

Thanks to Riley, Donovan had a fresh NCAA Division I playing opportunity in front of her.

“It was nice of her to give me a second chance to play, and I’m really grateful for it,” Donovan said.

In December of her freshman year, Donovan had knee surgery, making that year both a medical redshirt year and her inter-conference transfer year.

When she returned to action in 2016, she pinch hit initially and then, after producing in that capacity, she expanded to other roles, including third base.

Riley has come to appreciate the different qualities that Donovan brings to the team both in terms of play and personality.

“Karleigh is the kind of person that will speak up and take up for herself, which is an important quality to be taught, because we’ve got a lot of kids that are shy, and they’ll just let things happen to them,” Riley said.

The coach also has noticed that Donovan is quite loyal to her friends.

“It’s important to her that she has their back in critical situations, and I do think that’s important,” Riley said.

As for what has kept her loyal to softball, Donovan said, “I just love the game. It’s a fast-paced game, and I don’t like slow-paced games, and I’ve loved it since I was a kid.”

Moving forward at Longwood, she hopes to consistently hold a starting position at third base.

“I want to just continue to work hard and hopefully play there my last two years throughout both of the years,” she said.