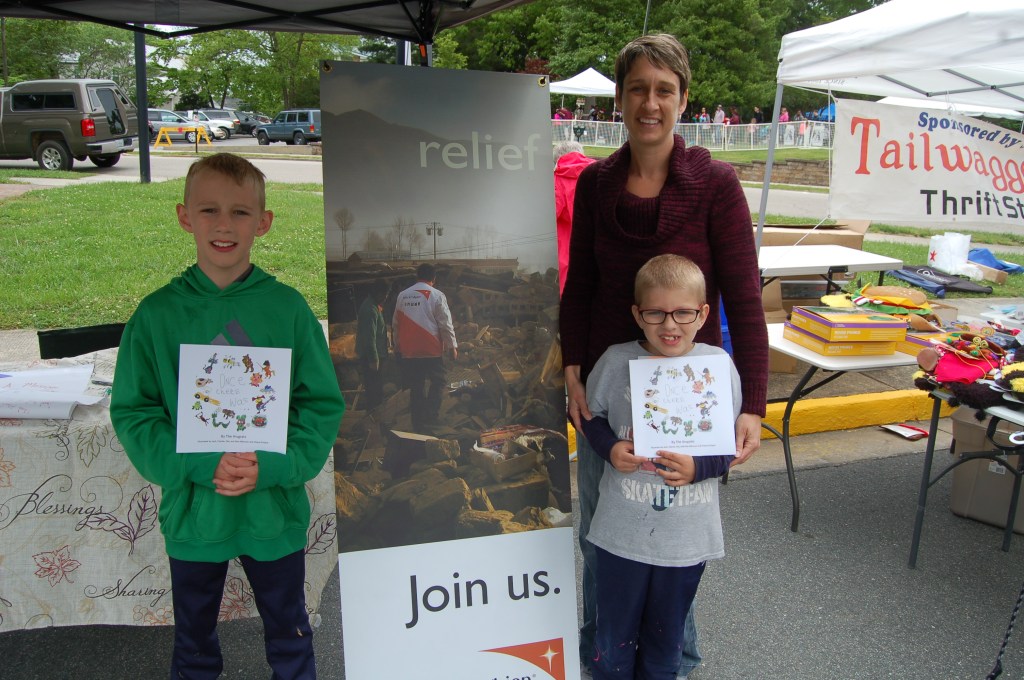 Jack Atkinson, left, Charlie Atkinson and Nikki Hall-Atkinson show off their children’s book “Once there was…” that they sold to raise money for World Vision.

Nikki Hall-Atkinson and her children recently finished selling stories they’ve written in a children’s book titled “Once there was…” during the Heart of Virginia Festival on Saturday in order to raise money for World Vision — an Evangelical Christian, humanitarian aid, development and advocacy organization.

According to Hall-Atkinson, the sales of the book resulted in a $920 donation to World Vision.

For more photos of the charity event, click here.

“The book is a collaboration, or was made from my children,” Hall-Atkinson said. “So, my four children — my oldest (was) actually the one who decided he wanted to sell a book to raise money for World Vision.”

Hall-Atkinson said what started out as a small project — one her son Jack Atkinson had brainstormed — that she had intended for family and friends to purchase turned into something much larger.

“We had been making up some silly stories, rhyming stories at night as a family before we went to bed,” Hall-Atkinson said. “So, while we were talking, (Jack) was like, ‘We should sell our stories. We can make a book and then we can sell them.’ I was like, ‘That’s a great idea, Jack. Let’s do that.’”

She said her other son, Charlie, made illustrations and her daughter, Ella, added splashes of color on the pages.

“So, I had the stories and I had the illustrations and I started thinking, ‘How am I going to put this together?’” Hall-Atkinson said.

She said they worked with a Longwood University art student to make the book look more professional.

Church and Community Events for the week of Jan. 13

Church and Community Events for the week of Jan. 7

Church and Community events for the week of Dec. 24