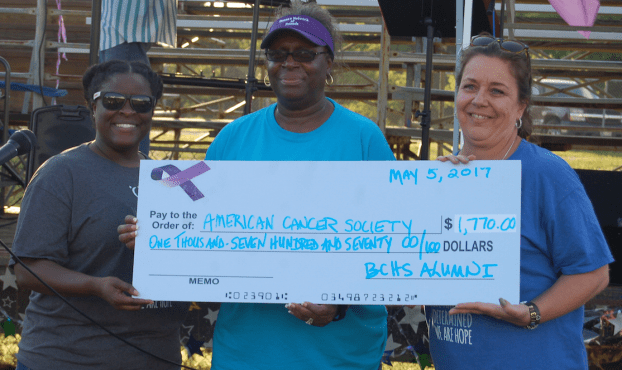 The Buckingham-Cumberland Relay For Life’s signature annual event was held Friday at Cumberland High School. The event, according to organizer Donna McRae-Jones, raised around $20,000 for the American Cancer Society (ACS).

“One year we did Relay (and) we only had five teams, but we kept it going, because one thing, if you stop something it’s hard to get it going again,” McRae-Jones said. 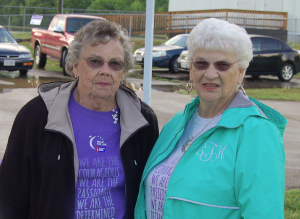 MORGAN WHITE | HERALD
Virginia Garrett, left, and Christine Thomas smile at the survivors’ reception during the Buckingham-Cumberland Relay for Life.

She said this year’s event almost didn’t take place due to various reasons. McRae-Jones said she was passionate about cancer survivors because of friends and family she’s lost to cancer.

“As I explained to my survivor group, I’m really passionate about my survivors because I lost two sisters to cancer, one at 19 from ovarian cancer when I was 11-years-old. I had a phobia at that time, thinking, ‘What if the same thing happens to me?’” McRae-Jones said. “I lost my older sister nine years ago in 2008 to liver cancer. She had beat it and it came back with a vengeance, so we lost her.”

McRae-Jones referenced a spiritual song with lyrics referencing “a war going on.”

“Cumberland is a very community-centered county. It’s definitely all about family which is exactly what Relay for Life is about because so many people are 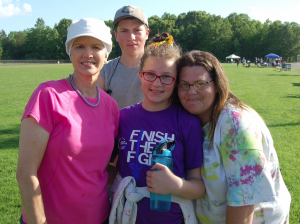 affected by cancer,” Thompson said. “It doesn’t matter our walks of faith or any kind of background — this is what keeps us together. So, we are so grateful to Cumberland because they continue to build this — and rebuild this Relay into making it about the county.”

Scotty Edwards, on behalf of Buckingham County High School Alumni, presented a check of $1,770 to ACS.

The event included a balloon release in remembrance of two sisters — Michaela Woodson, 16, and Tyauna Woodson, 14 — who died April 26 after a vehicle they were in veered off of the Willis River bridge into swift water in Cumberland.