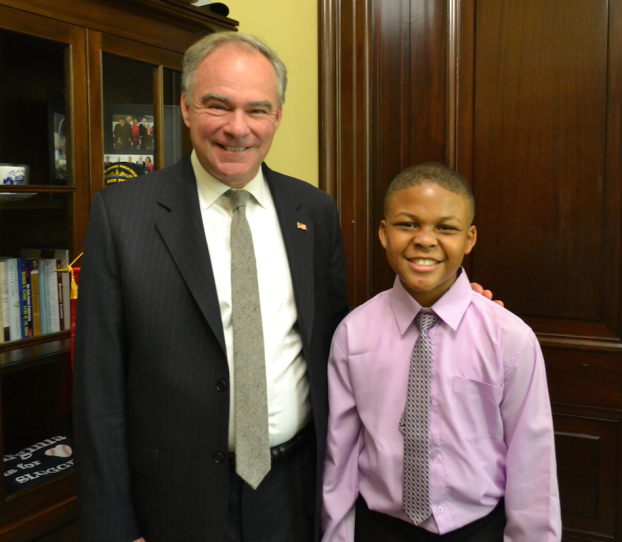 An inventive request to have a museum trip not count as a school absence led a Buckingham teenager to meet a Virginia senator and visit his office.

Jaylen C. Anderson, a seventh grader at Buckingham County Middle School, had all plans in place to visit the National Museum of African American History and Culture in Washington D.C. with his grandmother, Marjorie Chambers, on May 2.

However, the trip would have counted by the school as an absence as it would take place during a school day. Jaylen, who has a perfect attendance record, initially refused to go, his grandmother said.

After hearing of the dillema, Chambers wrote U.S. Sen. Tim Kaine in March asking if she and Anderson could visit the senator at his office. Chambers collaborated with Division Superintendent Dr. Cecil Snead and the Middle School Principal J.B. Heslip to make the museum and meeting with Kaine count as an educational trip instead of an absence.

Chambers said Kaine sent a prompt, FedEx-ed response, inviting them to meet him at the Russell Senate Office Building.

“Sen. Kaine was just so into Jaylen, and they sat there and talked,” Chambers said, who added enthusiastic treatment came from the staff as well as Kaine. “They treated him so royally.”

Jaylen said he and Kaine spoke about school and his attendance.

“I thought it was great and a fantastic opportunity for me,” Jaylen said. “It really excited me and when I saw him, I was amazed.”

Jaylen also had a good impression of Kaine as well. “He seems like a very nice and generous person,” Jaylen said, “and he was very kind to me and my family when we first approached him.”

Jaylen said he enjoyed visiting the National Museum of African American History and Culture, which he said, as an African-American, was a great venue to learn about his heritage.

“It really opened up my eyes to our history,” Jaylen said.

Chambers said she is still taking in the experience, but knows it will be something that she and Jaylen won’t soon forget.

“It was just overwhelmingly wonderful,” Chambers said. “I can’t even describe it because it was just such an awesome, awesome experience.”

Snead commented on the visit, saying that this is one of many experiences that Jaylen’s academic prowess has offered him.

“We are fortunate that we have been able to support such opportunities for our students in collaboration with our families,” Snead said in a statement. “Positive and productive relationships with our community only enhances what we can offer for our students.”