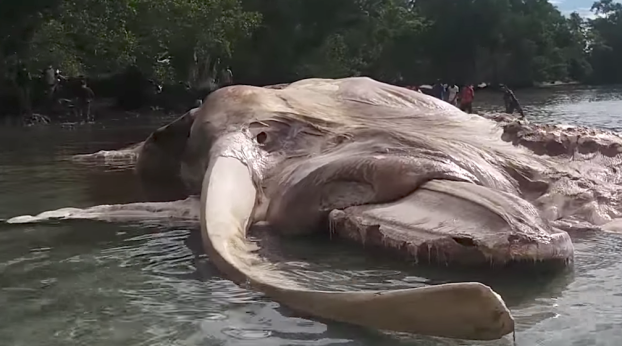 PATASIWA KUMBANG AMALATU | YOUTUBE Resting on a remote beach in Indonesia is a massive creature that Hampden-Sydney College professor Dr. Alex Werth identified as a whale in a fairly advanced state of decomposition.

A sea monster’s worth

Trinkle Professor of Biology Dr. Alex Werth at Hampden-Sydney College has been navigating a special and amusing experience in his career after having been consulted for expert input on a monstrous sea creature that recently washed ashore dead in Indonesia.

“I’m asked to comment often on scientific studies, but really, that doesn’t incite much passion or stir much excitement,” Werth said. “That’s pretty much within the scientific community. But this is something like Bigfoot or the Loch Ness Monster. This has stirred up a lot of interest.”

According to a report from the Jakarta Globe, a nearly 50-foot-long marine creature was discovered May 9 lying dead on Hulung Beach on Seram Island, Indonesia.

Pictures began to surface on the internet of the creature, including a YouTube video posted by Patasiwa Kumbang Amalatu.

Werth noted that his own research takes him far away from Hampden-Sydney, including places like New Zealand, Alaska and Iceland, but he did not see this particular creature in person.

“What happened in this case was that I have actually seen — as did many people with the internet and social media — these pictures of this creature, and shortly after seeing them, I was contacted by a reporter who had covered a little bit of my research years ago, and she knew that I was one of a handful — maybe two handfuls — of people on earth who studies the anatomy of whales,” Werth said.

The reporter was Tia Ghose, who provided him with some links and showed him more video of the creature to get his take on it. He identified it as a whale in a fairly advanced state of decomposition.

“Unless you really wanted a rare selfie, this is not something you’d want to be around because it would not smell very good at all,” he said in an interview with The Herald.

He explained the different observations that led him to the conclusion that it was a whale.

“First of all, you can tell that it has bones from the pictures and video, so that rules out anything like a squid or some other creature that is an invertebrate, that doesn’t have bones,” he said.

Illustrating some of the confusion the creature brought about, at least one news source initially reported it as being the remains of a giant squid.

“I think people are fascinated by really large things in the sea, and it’s so far advanced in its decomposition that it doesn’t immediately, obviously look like a whale,” Werth said. “And you kind of have to know what a broken-down whale looks like or what the insides of whales look like to know that it’s a whale.”

He noted the creature belongs to the genus Balaenoptera, and its species is somewhat unclear.

“Even now, it may be difficult to tell just because it’s so decomposed, but it’s almost certain that it’s a blue whale or a fin whale or other very large whale of that genus,” he said.

Werth estimates that the creature died two to six weeks prior to being found.