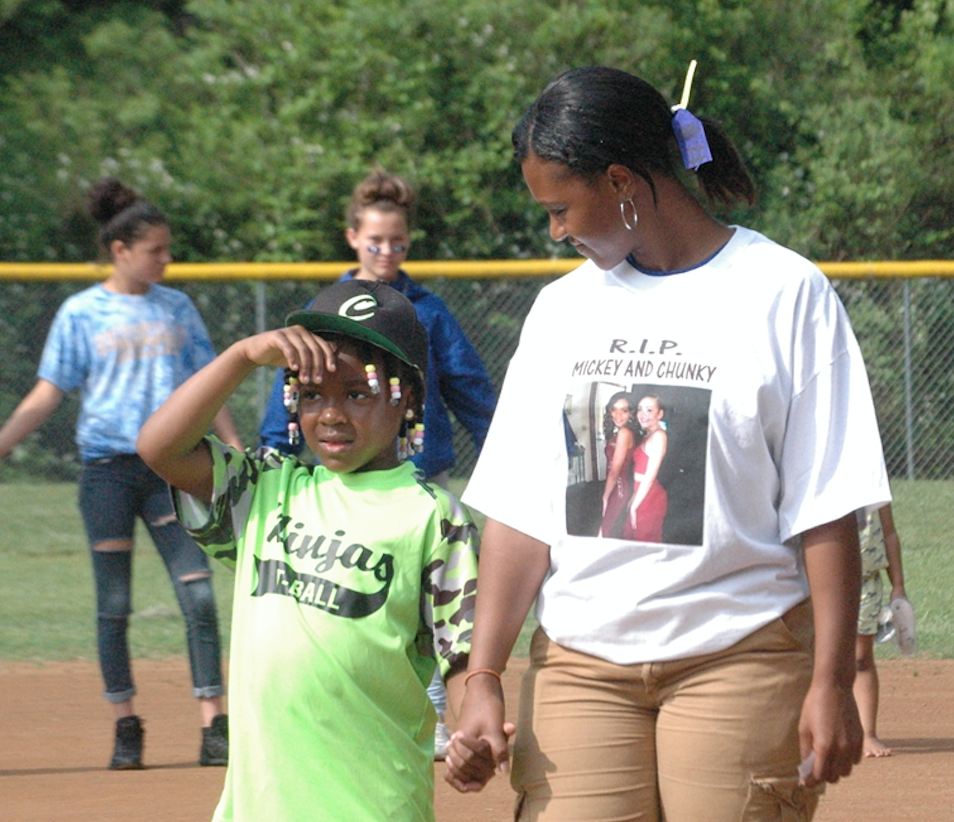 EMILY HOLLINGSWORTH | HERALD Hundreds of people attended events held Saturday and Sunday in memory of Michaela and Tyauna Woodson. Six-year-old Daryn Trent, the younger sister of the two, stands with Jolisa Jones, an assistant softball coach during one of the events.

The short lives of Michaela Woodson, 16 and Tyauna Woodson, 14, are being mourned and remembered after a vehicle they were in plunged off the Willis River bridge into the river Wednesday, April 26, claiming their lives.

Both were students at Cumberland County High School and are being remembered in the community as involved teenagers and athletes with warm and welcoming personalities.

A vigil held Sunday at the high school football field brought hundreds of people and students from the community, who filled bleachers and by the end of the event, the field.

During the vigil, dozens of students who were friends, classmates and teammates of Tyauna — nicknamed “Chunky” — and Michaela told stories about the sisters’ sense of humor, their academic prowess and their beautiful smiles.

The students surrounded the family on the field, offering prayers and hugs. Their words and prayers were followed by a balloon release and a candle lighting. 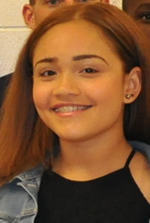 Breanne Woodson, Michaela and Tyauna’s mother, said she was initially unsure if she could make it through the event. However, when the students began sharing memories, she said she could picture her daughters’ performing the activities — their personalities shining through.

Tyauna and Michaela’s pastor, the Rev. Ollie Bolden, of Petersville Baptist Church, said the two girls were involved in the church’s Debutante program, which helps mentor young people for education and job training. Bolden said he had been surprised when the two girls had attended a sunrise service at 5 a.m.

He addressed Michaela and Tyauna’s parents, sitting on a bench closest to the field, saying, “You did a wonderful job

He prayed for the family and their friends, saying the two girls lived their lives to the fullest and set examples for the Cumberland community.

“(The event) hasn’t started yet and already so many people have shown up,” Thompson said. “Not only had we had to lean on each other, but also help each other out. I know I couldn’t do this alone.”

Jaiden Carroll, who also knew Michaela and Tyauna, said the past week has felt surreal.

“I’ve been shaken up,” Carroll said. “You didn’t expect this to happen to them.”

“They were well-liked by everyone,” Brown said. “When you saw one, you saw the other.” 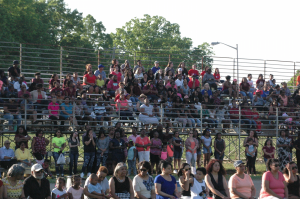 EMILY HOLLINGSWORTH | HERALD
Members of the Cumberland community look on during a vigil Sunday evening at the Cumberland County High School football field. Speakers during the event encouraged the community to be “Cumberland Strong,” and to remember Tyauna and Michaela Woodson’s impact.

She said she believed the event was helpful for members of the Cumberland community in seeking solace and comfort.

“I think it’s a good thing,” Brown said. “The community needs it.”

Charles Willis, executive director of the United Communities Against Crime, presented the family with a plaque from the organization, the mayor of Richmond and Gov. Terry McAuliffe, expressing their condolences for the family’s loss.

On Saturday, the members of the community held a moment of silence for the sisters before a softball game.

The game, which combined two Cumberland softball teams, the Blue Diamonds and Royal Ts, played against the Fluvanna Blitz and Fluvanna Smurfs.

Jennifer Wade, a volunteer and parent who coordinated the event, said the loss of the Woodsons have rocked the community.

“It was a very sad day for Cumberland,” Wade said. “We lost two beautiful girls.”

On their cheeks, they had paint with the numbers #1 and #8, the numbers of Tyauna and Michaela had while playing on the Cumberland County High School’s softball team.

Two members of the Cumberland High School softball team who played with Michaela and Tyauna, Katlyn Seaver and Joanna Johnson, attended. They said the event has been difficult to process, and that the ceremony was emotional for them.

“It’s been really hard,” Johnson said. “(I’m) not really processing it too well. Playing softball doesn’t feel the same without Michaela or Chunky.”

“It’s just really upsetting to not see them and play softball or talk to them at school,” Seaver said.

She first introduced the team members to the Woodsons’ younger sister, Daryn, 6, who plays for the Buckingham T-ball league.

Daryn was with her father, Darrell Trent, who said it has started to become easier to talk about Michaela and Tyauna, but that there are moments when the loss becomes overwhelming.

“It was very nice,” Darrell said about the memorial. “(It was) thoughtful. I am very thankful for what they have done.”

A funeral service for the two will be held Saturday at 1 p.m. in the Cumberland High School gym.