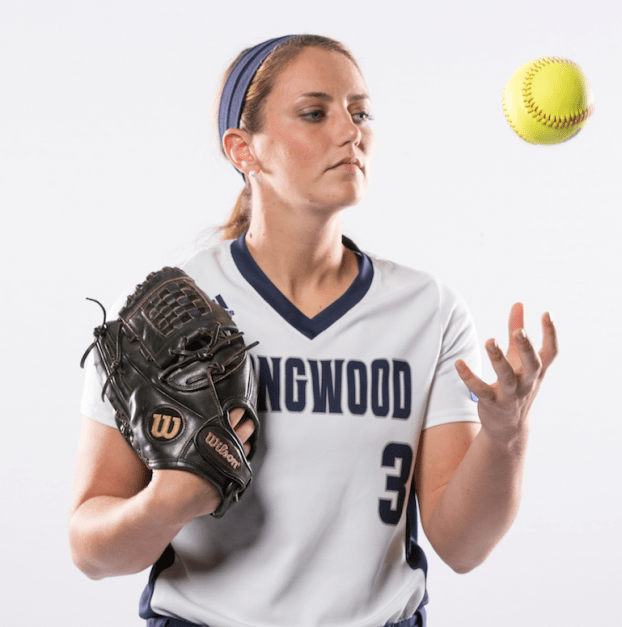 In the spring of 2011, Elizabeth “Biz” McCarthy sat in the stands at the home field of the University of Virginia softball team. A tall, talented left-hander out of Dunnsville, McCarthy was taking in the game as a guest of the Cavaliers, one of the many visits on her tour as a sought-after pitching recruit from St. Margaret’s School.

The Cavaliers invited McCarthy, then a high school sophomore, and her family to watch them take on a fledgling program out of Farmville named the Longwood University Lancers, which had only made the jump to the Division I ranks four years prior.

But for a team with little name recognition in the Division I ranks and no conference to call its own, the then-independent Lancers sure didn’t look like the new kids on the block. They played hard, they cheered for each other and they seemed unfazed by Virginia’s high-major, Atlantic Coast Conference pedigree.

Then there was their head coach, Kathy Riley, who coached as hard as her players played and whose on-field presence commanded the attention of her players and — as was necessary several times that day — the umpires.

“We need to find out more about this Longwood team,” McCarthy whispered to her father, Chip.

Longwood beat Virginia twice that day, and less than two years later, the 5-foot-11-inch southpaw was penning her name on a National Letter of Intent to become a Lancer.

Now as her final season in the blue and white comes to a close, that fated first brush with Longwood softball has blossomed into a historic four-year career in which McCarthy will leave Farmville as not only one of the best to play in a Longwood uniform, but one of the best pitchers the Big South has ever seen.

The back-to-back reigning Big South Pitcher of the Year, McCarthy is leading the Lancers into her final Big South Championship, a tournament that has twice ended with her hoisting the conference’s championship trophy alongside her teammates. This year’s tournament holds extra significance, as she’ll help the Lancers chase what would be their historic third straight Big South Championship, and she’ll do it here in Farmville in front of a fan base that she unknowingly joined the day of that fated doubleheader sweep over Virginia she witnessed in 2011.

This season McCarthy added to her lengthy resume by breaking Longwood’s career strikeouts record, surpassing the previous record held by Brianna Wells who, coincidentally (or perhaps not), was on the mound for all 14 innings against Virginia the day McCarthy first discovered Longwood. Along with her 637 career strikeouts, McCarthy also owns a 72-37 record, a 2.65 ERA and more than 700 innings pitched, ranking among the Big South’s all-time top 10 in wins, strikeouts, innings pitched and appearances.

However, McCarthy has done more than just pitch at a high level for the Lancers in her time with the squad. She’s also played an integral role as a leader among Longwood’s four-member pitching staff that leads the Big South in ERA and has helped the Lancers shake off a rough start to the season by winning eight of their final nine Big South games en route to earning the No. 3 seed in the conference tournament.

That leadership of her peers in the circle is something McCarthy has paid forward, having received the same mentorship when she was a mere freshman in her first go-round carving up Big South hitters. Her first two years, she teamed with Big South Tournament MVP Libby Morris to form the top one-two punch in the conference.

“What I really learned the most from Libby was thinking about the game — if I’m in this count with this many outs and this batter up, what am I going to do?,” McCarthy said. “I think that’s one of the most valuable things I’ve learned since I’ve been here.”

That relationship with Morris, both in and out of the circle, powered the Lancers to a program-record 41 wins during McCarthy’s freshman year in 2014. One year later, Morris and McCarthy formed the spearhead of a breakthrough Longwood team that won the 2015 Big South regular season and tournament titles and went on to win its first-ever NCAA Tournament game against commonwealth foe Virginia Tech.

McCarthy earned her first Big South Pitcher of the Year award that season, doing so even after Morris went down with a knee injury that forced her to miss nearly half the season. McCarthy stepped up, finishing second in Longwood’s all-time single season record books with 219.2 innings pitched and matching the program’s 203 strikeouts for most in a single season.

“I’m really proud of the first Big South Pitcher of the Year award I won, because that season Libby got hurt and I had to pitch 12 or 14 games straight to help my team,” McCarthy said.

That success continued into McCarthy’s junior season when she repeated as Big South Pitcher of the Year after leading the Lancers to a second straight Big South Championship and a trip to the NCAA Regional Championship game. With Morris gone, McCarthy became the veteran on the staff and in turn mentored All-Big South freshman Sydney Gay, who has stepped up to become the 1B to McCarthy’s 1A on the mound, just as McCarthy once did with Morris.

“Biz and I are really good friends on and off the field,” Gay said. “She took me in as a freshman under her wing. I think our relationship is more casual and relaxed on and off the field. There’s a lot of support given to each other. She’s definitely a leader, and I look up to her.”

Together, McCarthy and Gay led Longwood to unparalleled success en route to the program’s first-ever appearance in an NCAA Regional Championship game, breaking numerous records along the way including leading the Lancers to their lowest ERA in the Division I era (2.29) to rank among the top 25 in the NCAA and set a Longwood record for most strikeouts with 350 total.

McCarthy enters next week’s Big South Tournament as possibly the hottest pitcher in the conference, earning wins in five of her last six appearances to conclude the regular season. Included in that run is a one-hitter and a two-hitter in a span of three starts.

Now McCarthy has her sights set on a third straight Big South title, which would provide the climax in the final chapter of her storied four-year career. The road there begins this Wednesday, May 10, when the Lancers open the six-team Big South Championship tournament in Farmville.