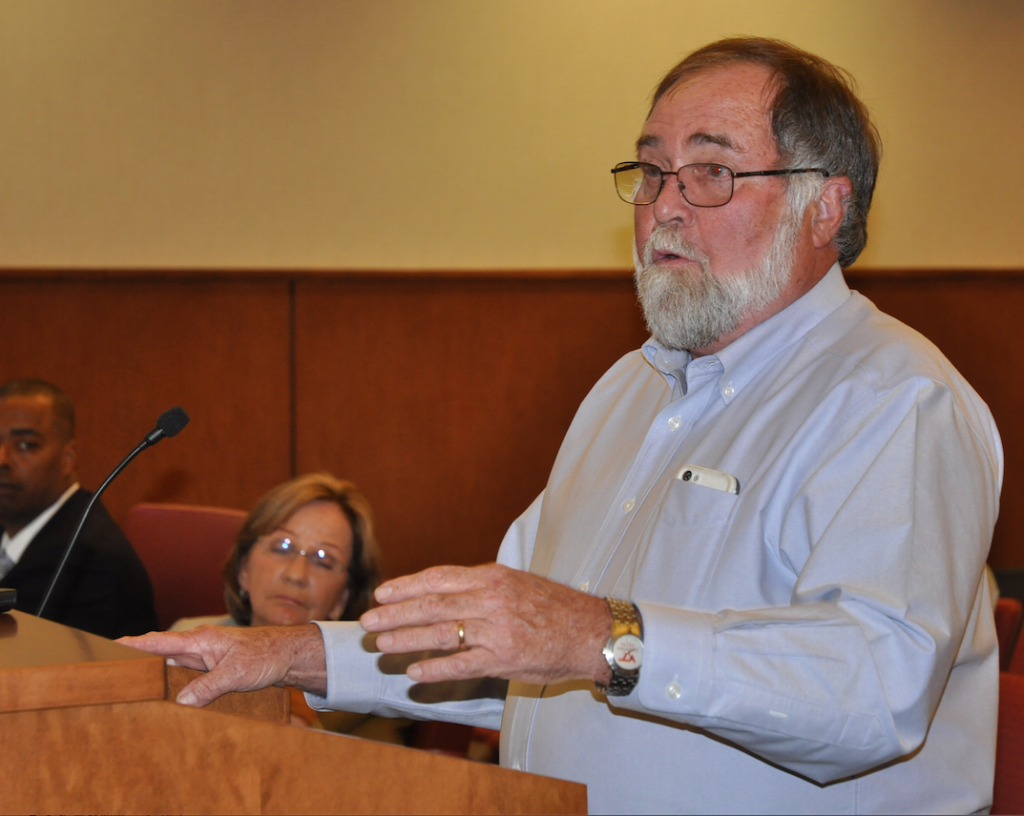 Seven people — ranging from volunteer firefighters to a member of a department’s auxiliary — spoke in support of a new rolling appropriation proposed by the four department chiefs in Buckingham County that would allow $200,000 for each department every four years.

The speakers participated in a public hearing held Monday night during the Buckingham County Board of Supervisors’ meeting on the proposed fiscal year (FY) 2017-18 $47.8 million county operating budget — one that includes no tax increases. 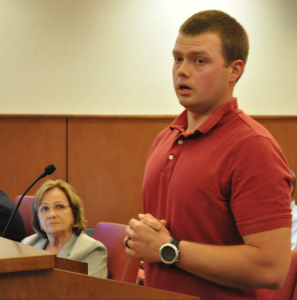 JORDAN MILES | HERALD
Tim Farrar, the assistant chief of the Dillwyn Volunteer Fire Department, speaks to supervisors about the need for greater funding for the county’s four volunteer departments.

According to the proposal offered to supervisors several weeks ago, the rolling appropriation would allot an additional $200,000 to one of the four volunteer fire departments annually. Over a four-year period — after all four departments have received the proposed $200,000, the county would have spent an additional $800,000 on the departments.

Supervisors took no action on the request, but agreed to meet Monday at 6 p.m. to consider adopting the proposed advertised budget and tax rates, a meeting where they could take action on the departments’ request.

Before the speakers took the podium, District One Supervisor and Board Chairman R.C. “Bobby” Jones proposed taking money from three different reserve funds to come up with the $200,000 in the upcoming fiscal year budget.

Saying his calculations resulted in $200,000, he said, “whether this is a reality or whatever, all I’m saying now is this board has got something to think about and the people do too.”

“Out of our discussions, it became clear that each department has financial needs that are significant and require long-range planning in order to ensure that we are able to maintain readiness and meet our mission to serve the citizens of Buckingham County,” the four department chiefs said in their initial joint proposal to County Administrator Rebecca S. Carter. “To that end, we have developed (a) proposal. We would like the county to consider implementing a rolling appropriation to each department, in addition to the regular appropriation, to assist us with the large purchases that are facing each department. By providing this on a rotating basis, each department will be able to plan for these expenses in such a way that will make paying for them manageable.”

The rotating $200,000 to the departments would be in addition to their regular annual appropriation.

“We recognize that this is a large request, although we also believe that the future of an effective fire service lies in a solution such as this … Additionally, each department will be submitting its regular appropriation request separately,” the four said in the letter.

“These men deserve the best equipment to do the job we so depend on them for,” said Shapiro. “The fact they are seeking a $200,000 rotation payment each year may seem like a great amount of money. But, when you look at that amount of equipment they must have to meet the needs of a large county like ours, it’s not.”

She said each station fundraises all they can, “but the equipment must be there.”

Her comments drew a loud applause from the crowd of volunteer fire department members and rescue squad members in the audience.

“We currently run a 1997 Freightliner KME pumper. It is 20 years old this year. It is draining us maintenance-wise,” Farrar told supervisors. “On average, (it costs) $350,000 to buy a new pumper that has no equipment on it. That’s cheap, bare bones … We just can’t do it without some extra support.”

“If you want to ensure the longevity of your fire service in Buckingham County, please provide the funding that was asked and not just a one-time deal. These expenses continue to go up every year … This will get us to where we need to start,” Davis said.

“We feel that what we’re asking of the board is a reasonable approach to a very expensive operation of a business,” said Steger. “We have to have the equipment to do the job.”

“There are very few departments as dedicated as the men and women behind me and that do more with less than they do,” Pullen said, noting he’d worked with many of Buckingham’s volunteers through his previous work with the Fork Union Volunteer Fire Department.

“The four fire chiefs developed this proposal in consultation with the membership from our four departments, and we brought it to the board of supervisors during the budget cycle not as a first resort, but actually as a last resort,” Bates said. “For more than 20 years, the fire departments have been actively engaged in grant writing in trying to raise money through external sources.”

He said all four departments engage in fundraising.

“We have to stay in compliance with national standards,” he said.

“Every single member of the four fire departments … are taxpayers. We’ve got skin in the game both financially and every time that alarm goes off.”

He pointed to the more than $500,000 in the county’s reserve for contingency as a source.

“I do feel the pain for you guys,” District Two Supervisor Donnie Bryan said after explaining the county required itemized financial statements for entities that receive county funding.

“I said early on I would support the fire department. I think it’s necessary … The expense continues to goes up,” District Six Supervisor Joe N. Chambers Jr. said. “I think we should support them … I’m 100 percent behind them.”

During Carter’s presentation on the budget that preceded the public hearing, she reviewed the proposed budget’s revenues and expenditures and changes in each category. She said the reserve for contingency totals $540,427.

“As you know, the cost of nearly everything related to fire service equipment, gear, insurance, etc. has historically been quite high,” the four department chiefs said in their original correspondence to Carter. “Apparatus are the high-profile items that everyone knows are unbelievably expensive — a new pumper can easily exceed $400,000 — but what most people don’t realize is that merely outfitting one firefighter with personal protective equipment and a radio can easily top $2,500. This gear needs to be replaced on a rotating basis in order to maintain effective firefighter protection. Self-contained breathing apparatus cost about $7,000 each and every department requires at least a dozen of these units. These are just a few examples of the expenses that each department routinely deals with.”

From a financial perspective, the four wrote, “over the past five years, all four departments have averaged approximately $110,880 in revenue, with the county contributing an average of $54,000 per department over that same time. Expenses over this same time have averaged $103,280, producing a surplus of just $7,600 to cover any unforeseen expenses. There have been years where a deficit has occurred as revenue has dipped and expenses exceed forecasts. Bearing in mind that each of the four departments has approximately 20 active members, this means that no more than 80 volunteer firefighters are providing all fire service protection to a county of more than 17,000 people. Needless to say, the workload on these volunteers is extensive.”

Eddie Slagle, who didn’t address the fire department’s request, thanked District Three Supervisor Morgan Dunnavant for attempting to lower the real estate tax rate by two cents during a previous budget work session. He asked the board to consider reducing the tax rate on motorhomes and boats to the same as aircraft. “I believe this would increase the tax revenue by increasing purchase of these items,” he said.