Covance Animal Research on French’s Store Road in Cumberland was the subject of a video released in early April by an animal advocacy group.

SHowing Animals Respect and Kindness, or SHARK, published a video of the facility on YouTube, using a drone to record the footage.

The video shows aerial footage of the facility, where the viewer can see several warehouses that appear to hold the animals and hear continual barking from what seems to be hundreds of dogs.

“What you are hearing is the sounds of thousands of distressed beagles,” the video’s voiceover said.

The video notes that the drone has flown over the facility several different times of the day and each time has heard barking dogs. 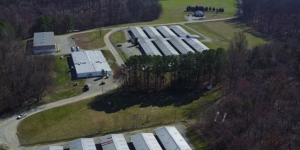 SHARKONLINE.ORG
The video released by SHARK contends that the facility warehouses animals and notes the continual barking of dogs throughout their footage.

“Besides beagles, Covance breeds and warehouses rabbits, guinea pigs, primates and pigs,” the voiceover in the video says.

Pattie Kushner, vice president of corporate communications with Covance, said the research organization is aware of the footage at the facility in Cumberland. Kushner said the facility’s goal is to conduct research to further medical treatments for diseases like cancer and Alzheimer’s.

“Covance has made significant contributions to the discovery and development of life-saving and life-enhancing new medicines for cancer, deadly infections, heart disease, leukemia, diabetes, Alzheimer’s, multiple sclerosis, cystic fibrosis and many other disabling diseases,” Kushner said in a statement.

She said the organization follows closely with legal regulations and requirements for proper care of the animals in the facility.

“Covance takes our ethical and regulatory responsibilities very seriously — we treat our research animals with the utmost care and respect,” Kushner said. “Covance is proud of our excellent compliance record, with programs and facilities that meet or exceed all regulatory and legal requirements.”

“In addition to being the right thing to do, the proper care of research animals is fundamental to sound, scientific research and the ability to develop safe and effective new medicines that save the lives of people and animals,” Kushner said. “There are clear links between excellent animal welfare, great science and medical breakthroughs.”

A People for the Ethical Treatment of Animals (PETA) U.S. undercover worker released recorded footage of a Covance facility in Vienna, Va. in 2008, showing employees’ treatment of primates.

Covance, according to a release from PETA, had brought a lawsuit to PETA U.K. to prevent PETA from publicizing the undercover footage. However, the case was dismissed in a British court and the company paid PETA Europe $290,000 in the lawsuit.

This is a corrected version of the original report.