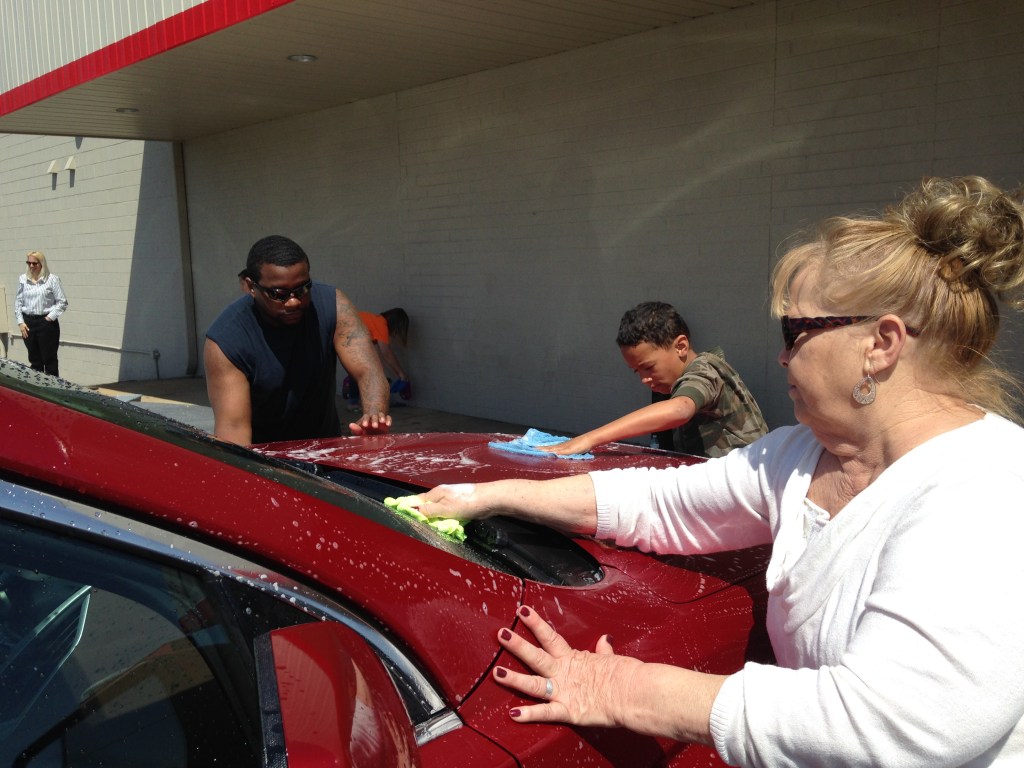 JORDAN MILES | HERALD From left, Darius Nelson, Martin Alexander and Sandra Ownby wash a truck during a benefit fundraiser for the families of the late Tori Perez and Jaiden Bartee.

By Jordan Miles and Morgan White

Through bake sales, car washes, churches taking special collections and other fundraisers, the Buckingham community is rallying behind the families of a five-year-old girl and a six-year-old boy who were struck and killed by a tractor-trailer Thursday morning on U.S. Route 15 when attempting to cross the road.

According to Virginia State Police spokeswoman Corinne Geller, the children, Tori Perez, 5, and Jaiden Bartee, 6, were struck by the tractor-trailer and both died at the scene.

Beginning Thursday afternoon, a movement on social media began in Buckingham where those on Facebook changed their profile photos to a graphic depicting a heart with a Christian cross overlaid with “#BuckinghamStrong.”

“A tractor-trailer was traveling north on Route 15 as a Buckingham County school bus was approaching in the opposite lane. The school bus was traveling south on Route 15 and began slowing to pick up six children standing off the north side of Route 15. As the bus was slowing to a stop, two of the six children ran across the northbound travel lane toward the bus. The bus had only its yellow flashing lights activated,” Geller said.

“Tori was a sweet, loving (and) strong individual,” said Lorenzo Green, Tori’s uncle. “Strong because she survived a horrible car accident over a year ago. Jaiden was baseball, baseball,” Green said of Jaiden, his cousin. “Pretty much, I’ll remember them as the bright, church-going lil’ ones who enjoyed school, enjoyed family (and) enjoyed life.”

“The community and surrounding communities have shown love and support to us by offering their prayers and additional counselors for grief and bereavement purposes,” said Division Superintendent Dr. Cecil Snead. “My staff and students need to work through this loss through the natural progression of grief. In our after-action planning meeting … we discussed many ideas to honor the students and their memories; however, it is apparent that there needs to be time to heal. Please keep that family in prayer.”

Police say there were no other injuries in the incident.

On Sunday, dozens of people came together, filling the parking lot at Advanced Auto on U.S. Route 15 in Dillwyn at a bake sale and car wash. The event, along with a similar one held Monday, netted more than $14,600 for the families. A GoFundMe account set up for the families has seen more than $26,000 in donations.

Sandra Ownby is a neighbor to family of the two children. She helped wash cars Sunday.

“I think it’s amazing how people come out,” Ownby said as she washed the hood of a vehicle alongside a child and a man. “People here are amazing about coming together.”

Franklin Glover organized the Sunday event through his Bucktown Car Club. He was a cousin to Bartee.

“From what I see now, it’s going to be a pretty good turnout,” he said Sunday afternoon.

Franklin was impressed with how smart Bartee was, noting he was smarter than many boys his age. He said Bartee loved football and karate.

“They were just adorable kids.”

Perez, her family said, was very active in church and loved school, noting she was “a joy to be around.”

“After viewing the video obtained from the school bus, it has been confirmed that the school bus made a right turn from Route 692/Baptist Union Road onto Route 15 to head south and proceed approximately 200 yards to its next stop,” Geller said Thursday evening. “As the bus approached the children who were standing off the north side of Route 15, two of the six children ran across the northbound travel lane towards the bus. The bus had only its yellow flashing lights activated.”

“The four other children at the bus stop stayed on the side of the road and none of them (were) injured,” Geller said.

“The vehicle was in compliance with commercial vehicle regulations, and the 66-year-old male driver from Dillwyn …  has a valid commercial driver’s license,” she said.

“No charges will be placed,” Geller said.

Barbara Rose, a great aunt of Perez, said on scene the loss was “just one you just can’t swallow,” regarding the loss of her niece.