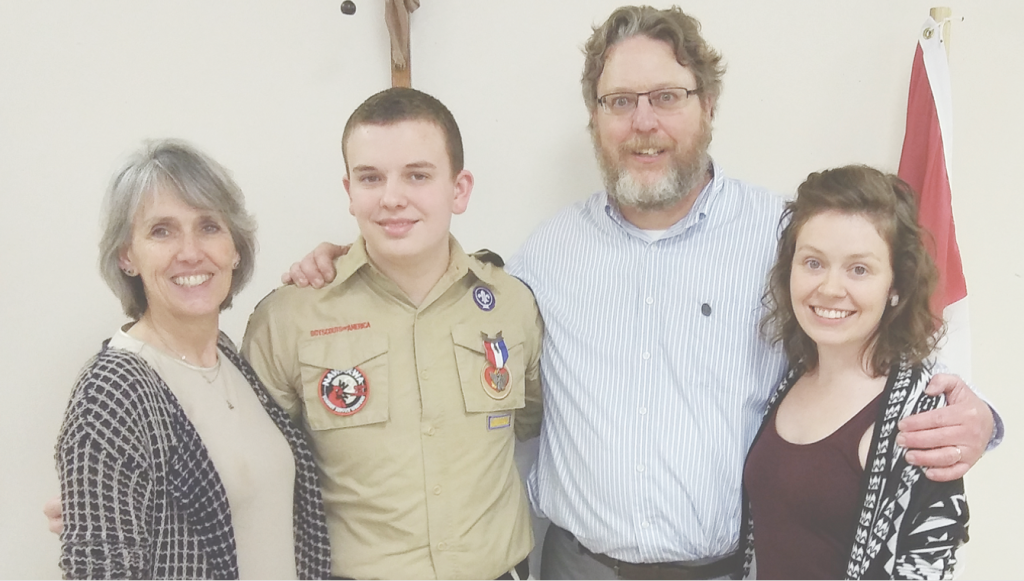 “Jeremiah’s Eagle Service Project benefited the community through the St. Theresa Catholic Church Food Pantry,” according to a press release. “He raised funds and replaced the worn-out flooring in the pantry, then purchased a new refrigerator and additional food for the pantry.”

According to the release, Jeremiah serves his community through his church and other organizations, and provides leadership to his Scout Troop.

“During the Court of Honor, Jeremiah was presented his Eagle Pin and Rank Patch. Jeremiah presented his mother, Patricia, an Eagle Scout Mothers Pin and his father, Ren, an Eagle dad’s tie pin recognizing their support through the years he has been a Scout working toward the Eagle rank. Each Eagle Scout receives a Mentor Pin to present to their Eagle Scout Mentor. Jeremiah chose to present the pin posthumously to Elias Jones, his brother scout and good friend who died in 2012. Elias’ father, Dennis Jones, accepted the pin on behalf of his family.”

According to the release, Jeremiah also received an American Flag that had flown over the U.S. Capitol, a plaque made by his troop, congratulatory letters from U.S. Sens Tim Kaine and Mark Warner and numerous cards and gifts.