The day’s programming was led by students enrolled in the university’s Adventure Programming Class.

Regarding the Longwood class, the class’ professor Dr. Rena Koesler— who is the chair of Longwood’s health, athletic training and kinesiology department — said the day helped her students learn about working with students in the outdoors. 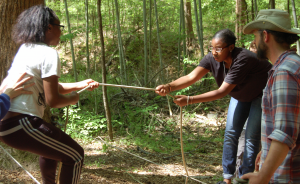 “It prompts students to learn about how to program and give lessons for young kids about the environment and the outdoors and different skills they can learn,” said Koesler.

She said the PECHS students participated in a fire building class, an outdoor cooking class, an orienteering class along with ropes course activities.

“They rotate about every hour, and then they take a different class so at the end of the day they go home with four different classes they’ve learned,” Koesler said. “And it’s fun. It’s great for my students because they learn how to facilitate and teach the stuff, and it’s great for Janet’s kids because they learn about these kinds of skills. (It) gets them out of the classroom, gets them outdoors and in nature.”

Green’s advanced physical education class will culminate in a trip to Wilck’s Lake Island where the students will participate in kayaking in May.