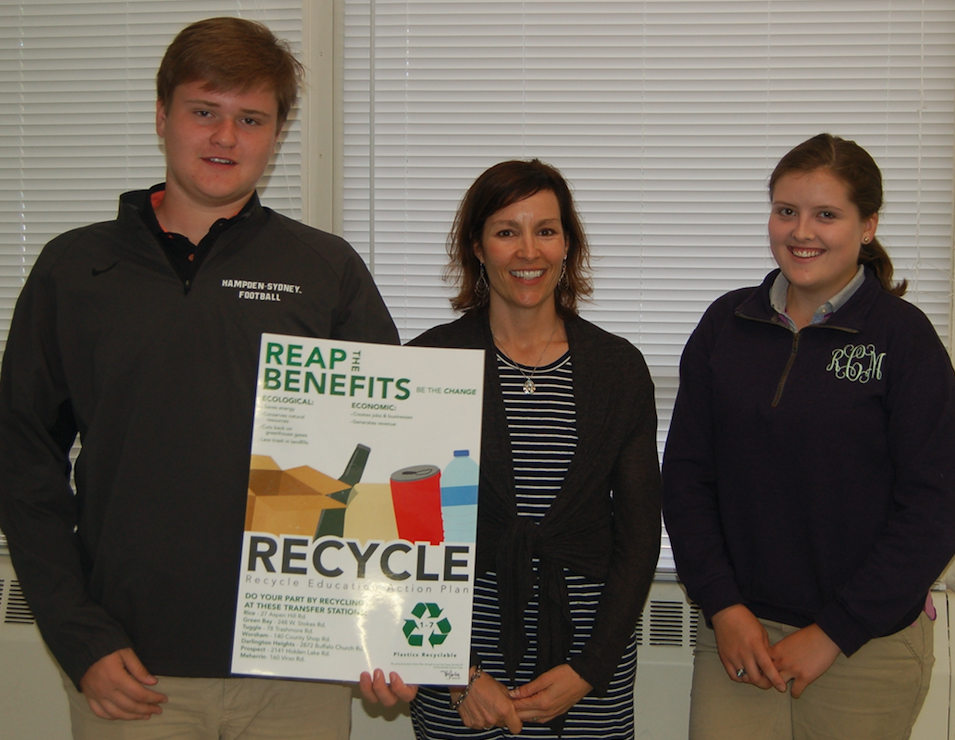 MORGAN WHITE | HERALD Students at Fuqua School have been working on a community action plan to raise awareness regarding the benefits of recycling. Pictured are, from left, Ethan Watson, Kelly Atkinson and Morgan Cole.

Environmental science students at Fuqua School in Farmville have spent the last semester creating and implementing a community action plan to increase recycling in Prince Edward and in the Town of Farmville.

According to environmental science teacher Kelly Atkinson, the students spoke to Farmville Mayor David E. Whitus and received support from both him and Town Manager Gerald Spates on their project.

“Our mission statement is to increase the awareness of recycling in Prince Edward County and the Town of Farmville and to encourage the practice of recycling for the future of the heart of Virginia,” Fuqua student Morgan Cole said.

Cole said the entire class has spent one or two days a week working on the project during the semester. She said in the beginning, the class was split up into groups of three including planning, marketing research and public relations, but has now come together to finish the project.

“We decided to do this project … based on the need we identified in the community,” Fuqua student Ethan Watson said. “Part of our class was to do an action plan and we’ve been working hard on this.”

Watson said the students’ goal of project is to decrease trash and increase awareness throughout the community.

Cole said certain plastics, paper and aluminum can be recycled in the county.

Watson said the students felt they could make a difference in the county by showing people what and how to recycle.

“Hopefully people would get inspired to make a change,” Cole said.

Cole said citizens should expect to see posters they had designed by the Longwood Design Lab in the community.

Atkinson said that one of the students is also planning to talk about the community action plan on the radio.

“I’m so proud of them. They worked hard this semester,” Atkinson said. “Taking on this action project is something I’ve always wanted to do with my students, and this was the perfect group for it. I feel like they’ve done a really good job.”